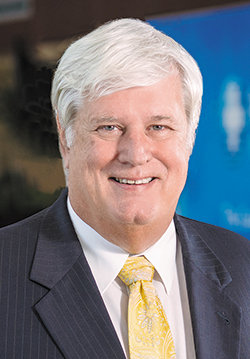 Take a look at the resume of Robert Pryor, MD, and it would be hard to not be impressed. The story it tells is one of a man who is as accomplished as a physician as he is an administrator. Today, Pryor has shifted from a consulting role with West Tennessee Healthcare to a permanent one as Chief Physician Executive where he has been charged with engaging the medical staff in robust clinical quality integration and improvement initiatives, patient safety standardization and physician leadership development and engagement.

Healthcare became a part of Pryor's life early on. He hails from Temple, Texas the home of Scott and White Healthcare, which in 2013 combined with Baylor Health Care System to become Baylor Scott & White Health, the largest not-for-profit​ healthcare system in Texas and one of the largest in the United States. While in high school, Pryor helped clean the hospital at night and thanks to a pathologist who took an interest in him, his interest in medicine began.

Pryor attended medical school at the University of Texas and completed his post graduate training, focusing on pediatrics, at the University of Oklahoma and Baylor College of Medicine. His medical career includes the distinction of being among the first group of board certified pediatric intensivists in the country.

After 20 years in practice and earning an MBA, Pryor began his shift to administration when he became chief medical officer for a hospital in Phoenix. He was then recruited to Scott & White Healthcare which eventually merged with Baylor Healthcare where he served as president and chief medical officer for the not-for-profit healthcare system that included 53 hospitals and more than 900 access points. "There were more than 70,000 employees in the Baylor system," said Pryor, "and all called me Bob."

When retirement approached, Pryor realized he was not ready to stop working, so he began a part-time job with Kauffman Hall Associates, a healthcare consulting company. The part-time turned into the full-time position of senior vice president which led to him working with West Tennessee Healthcare.

"While I was in practice in the 1990's, I helped put together the Children's Hospital of North Texas. During that process, I became interested in the fact that physicians and administrators say the same thing but argue because they don't realize it," said Pryor. "Healthcare is a team sport, and we all have to work together bringing our own expertise into the mix for the best patient care."

As a consultant to West Tennessee Healthcare, Pryor was to assess how the hospital and physicians could better work together. Upon arrival, Pryor said he was immediately impressed with what he found in not only the team, but especially its leader. "The key to all this was the brilliance and capabilities of J.R. Ross," he said. "He is one of the best leaders for healthcare in the country and I have seen a lot of them and been one of them - he is what makes it work around here."

Through conversations with Ross, it became apparent that someone was needed full-time at West Tennessee Healthcare. "J.R. asked me to come work with them and a few months later I came on board," said Pryor. "One of the biggest reasons I wanted to come was to have the opportunity to work with J.R. and to get to know him better."

Since his arrival two months ago, Pryor is doing much of the same thing he did as a consultant; bringing combined accountability and capabilities to the healthcare team under the direction of Ross. "It is all about the mission here and the only interest, is the interest of the patient," said Pryor. "The medical staff and administration have a common culture here. It is just a matter of

understanding the root of a problem then developing an action plan to solve it, as well as any underlying issues. The goal is to get to the best possible decision at the earliest possible time."

Adding a degree of difficulty to things is that healthcare changes rapidly, almost on a daily basis. "We are seeing changes in regulations, payment structure and expectations. The model of caring for the sick is shifting to keeping people well," said Pryor. "What worked in the past, will not work in the future so it is going to take new solutions to these ever-changing problems."

Pryor found that WTH was doing better on the issue than the national average. "It is just JR's vision to take this to the next level, and I am proud to be a part of that," he said. "I have been in lots of places around the country and can add some unique perspective to things. But ultimately, healthcare is local, so our solutions will be uniquely West Tennessee solutions."

Right now, Pryor says he is doing a lot of listening to get some perspective on where people are coming from. "I have found that it is always best to listen first in order to bring people together to identify where we can make improvements. I have no preconceived idea of what it is, but people do here so once we get problems listed, we will bring a team together to identify solutions and get to work," he said. "Everyone is curious about why I am here. I am here to help. I have already been CEO and have no desire to do that again. All I want to do is be here to help and get things done in the best way I can."