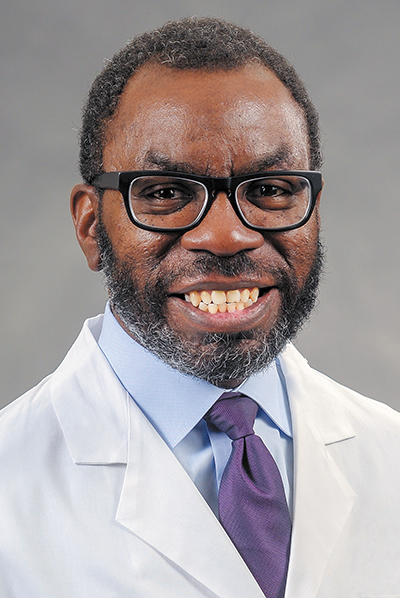 According to Dr. Theodore 'Ted' Wright's mother, he first announced he would be a surgeon to her when she dropped him off at the playground at preschool, but he says that may be a bit of a stretch. Regardless of when he actually made the decision, Wright took it a few steps further than just surgery and specialized in cardiothoracic surgery, and even on the faculty at the University of Kentucky Medical Center. In early 2018, he switched from teaching fellows to patients when he joined the cardiothoracic surgeons at West Tennessee Healthcare.

Wright grew up in Ashbury Park, New Jersey, graduated high school in 1987 and received his undergraduate degree from Princeton University. "I knew in college I wanted to pursue a profession that would allow me to mesh my affinities for social service and science," said Wright. "Medicine was the perfect solution. Along my journey to this point, there were several individuals who I met that served as role models for me and helped guide me into medicine and greatly influenced how I approach patients and patient care today."

"I loved anatomy and being able to make a difference with my hands led me to pursue surgery," said Wright. "Then once I was exposed to cardiac surgery, valve replacement and bypasses in my residency, I got the bug to do cardiac and thoracic surgery."

In 2005, Wright went into private practice and was Chief of Cardiothoracic Surgery at Saint Joseph Hospital in Lexington, Kentucky. After eight years he transitioned to academia serving as the Assistant Professor of Surgery, Clinical Title Series, at the University of Kentucky Medical Center. In this role he was not only the attending physician and treated patients, he also was responsible for overseeing and teaching medical residents.

"One of the physicians I helped train, Dr. Hetal Patel, joined the group in Jackson after he completed his fellowship at Kentucky," said Wright. "He contacted me about the opportunity here in Jackson. I was very impressed with what I found here; great people who have a can-do attitude when it comes to cardiac care. Drs. Sievers and Patel are some of the best cardiac and thoracic surgeons I have seen and fact that all are very focused on providing the best patient-centered care made the program here at Jackson Madison County General Hospital a great fit for me."

One of the things Wright liked the most was the collaborative nature of the physicians in the group. "It is the leading cardiothoracic surgery team in the region that provides some of the most advanced care available to our patients," he said. "Our team includes surgeons from some of the top heart programs in the country who provide state-of-the-art services and expertise. We are the only group in the area with surgeons who provide open heart procedures. Outside of transplants, we have all the tools to provide the services and care patients need right here in Jackson."

The biggest challenge Wright has faced since coming to West Tennessee has not been in the operating room but at home. "Moving to Jackson meant moving away from my wife Saskia's family," he said. "I came initially, then my wife, twin sons and 88-year-old mother moved here about six months ago so we have been reconnecting and enjoying as much time together as a family as we can."

Since he came from a university hospital, one might think Wright would have had to adjust to being in a smaller hospital but that was not the case. "Actually, it is as big as any hospital I have ever worked in," he said. "The job and the opportunities here are what attracted me the most. This area is known as the coronary valley because of the high rates of obesity, diabetes, hypertension and the issues that those conditions cause. There are so many people here that need help and unfortunately, they often times do not seek help until quite late in the game. All these factors are helping this program to grow. Our hope is to have more advanced practice providers and nurses to help mature the program and provide the care needed. The data shows we are providing excellent care here in Jackson and that is what we want to continue to grow."