The Wild West of Ophthalmology 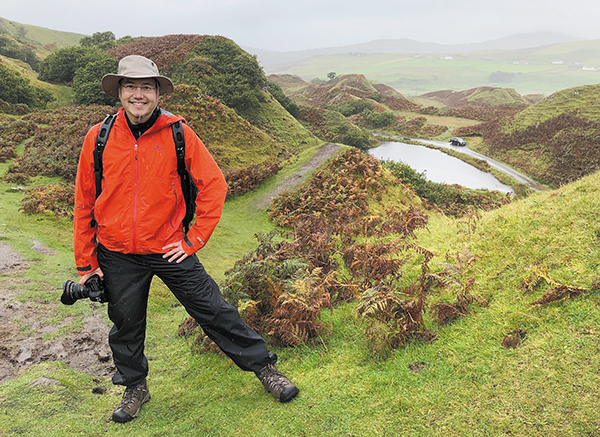 There's something new every day for T. Sunny Khamapirad, MD

It may not be the wild west and he may not be a real cowboy, but for retinal surgeon T. Sunny Khamapirad, MD, this niche specialty of ophthalmology is one of the frontiers of medicine because each patient is a little different and you never know what to expect. With the lasers, microscopes, microsurgical instruments, and imaging that come with the territory, it may seem more like science fiction than a western. But for patients across West Tennessee and North Mississippi dealing with diseases of the eye or in need of surgery of the vitreous body and the retina, Khamapirad, or Dr. Sunny as his patients call him, is just the doctor that may save their eyesight.

Born in Bangkok, Thailand, Dr. Sunny was a child when there was much turmoil in Asia. Communism was on the rise, Thailand was expected to be the last domino in Southeast Asia to fall and the Vietnam War was raging. His parents were both physicians who had done their residency and fellowship training in the United States but had returned to Thailand to practice. They wanted to remove their sons from the area before they were forced to evacuate. So, at the age of seven, Dr. Sunny and his brother emigrated to Houston, Texas to join their mother, a radiologist who was in practice there.

"At the time, my father was an ENT surgeon and involved in Thailand government. He was very patriotic and wanted to make the country better from the inside out. He was a Deputy Minister in the Department of Transportation so he was finally in a position of influence and could improve Thailand. Since he had not taken his boards in the states, he would not have been able to practice medicine here," Dr. Sunny said. "He would come over a couple of times a year to visit us and I spent my summers in Thailand with him."

With both parents in medicine, it seemed that would be the path Dr. Sunny would take when he entered college at the University of Houston. "I liked science and ended up double majoring in biology and chemistry, but I was not sure I would go into medicine. My mother never put any pressure on me, and my dad actually encouraged me to do something else," he said. "At that point my father was branching into a non-traditional and holistic medical field that involved projects that could help everyone, not only his patients. He considered the entire country his patient. His projects, such as high protein rice and ultra-purified water, helped to improve nutrition for the poor rural farmers. He was also a very business minded person and had hoped that we would go into some kind of business that would bring commerce back and forth between our countries and would allow him to see me more often."

Dr. Sunny's love of science eventually won out and he entered medical school at Baylor University. Like a kid in a candy store, Dr. Sunny enjoyed almost each rotation as much as the next. "At the end of the third year I had to step back and assess what I liked about each and what I didn't so I could narrow it down. "Since I liked working with my hands, I knew it would be something in a surgical subspecialty or an interventional field of medicine," he said. "I was considering orthopedics after that rotation, but then I did two weeks in ophthalmology. From lasers to all the high-tech equipment, I was smitten. I also loved that it was not confined to a certain population, patients spanned the gamut in age. There were just so many avenues and the more narrowly you defined things, the deeper it got."

To Dr. Sunny, retinal surgery was like the wild west of ophthalmology. "Every patient can be a little different or very different, which makes it more challenging," he said. "We are doing things in the office now that we could only do in the operating room just a few years ago. With new injectable drugs, we are also able to successfully treat conditions now that were blinding when I was training. It's an immensely satisfying field of medicine to be involved with, both technologically and emotionally."

His exposure to retinal surgery was somewhat limited during his residency training in ophthalmology at UT Health Science Center in Memphis. "Not all ophthalmology residency programs have retinal programs and at the time UT was one of those that did not, so our exposure to it came from people who came in from the community to do certain retinal work. We did not get to see many surgeries," said Dr. Sunny. "After finishing residency at UT, I had to apply for a retinal fellowship with a different program. At the time, my brother was in Boston attending Harvard Business school, so I applied and was accepted into a Retina and Vitreous Surgery fellowship at Boston University Hospital."

Fellowship training, said Dr. Sunny, is where you get your feet wet under supervision. "You start refining your skills in the operating room, as well as in the office with patients," he said. "What they taught us in med school and fellowship did not prepare me for real life. We were taught to give the patient options for their treatment and inform them of the positives and negatives of each treatment regimen. In reality, at the end of the discussion, most patients would end up asking what I would do if I were in their position. It makes me uncomfortable to this day since what may be right for me at my stage of life may not be the right choice for them at theirs.

Dr. Sunny joined the physician staff of Mid-South Retinal Associates in 2003 in their Memphis office. "Each surgeon was expected to see patients in a satellite office. While most patients will come to the main office, it was easier to do their follow up in the community, and it helped to establish a presence there to draw in more patients from that area," he said. "My satellite was Jackson. A few years into work, I realized that I enjoyed working in Jackson more than Memphis. It was more laid back than Memphis with no traffic. Therefore, I moved to Jackson to practice beside Dr. Brad Priester. Jackson is now my main practice site. Our office at that time was very small and we could not both work in the office on the same day. I had to find another place to work so I headed south to Corinth, Mississippi for a satellite clinic there one day a week. We moved to a larger office space in 2012 which meant we could be in the office on the same days. Recently, we were joined by our Memphis partner, Dr. Gordon, who has decided to make Jackson his main practice as well.

The practice skews towards an older population since many diseases of the eyes affect older individuals to a greater degree. Currently, baby boomers are becoming a larger part of their patient population. Diabetic eye disease and macular degeneration are a large part of any retina practice, since both conditions can severely damage the retina and sight. Retinal tear and detachments, vascular occlusive disease, inflammatory disease, and infection round out the rest of the day. "It keeps you busy and no day is ever the same," said Dr. Sunny.

Diagnosing disease in ophthalmology relies heavily on observation and imaging such as ocular coherence tomography, fluorescein angiography, and ultrasonography. "It is a high-tech field. As an amateur photographer, I love that it is an imaging intense field. The retina is really a window into the entire body. We can definitively diagnose or have insight into many different disease processes just by looking inside the eye in a non-invasive way. It is so interesting because you never know what you will see or find each day."