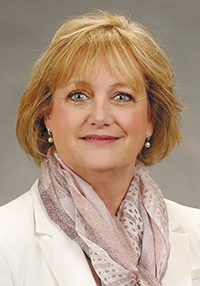 When you make the switch from one of the largest healthcare systems in the country to one in West Tennessee, you would think there would also be a huge shift in issues but for Wendie Carlson that was not the case. What she found seven years ago when she joined the C-suite at West Tennessee Healthcare as VP of Human Resources were many of the same issues she had been dealing with - just on a smaller scale. Today, as the chief human resources officer for the largest medical provider in the area, Carlson's experiences and knowledge gained at the largest not-for profit healthcare system in Texas are just as applicable and beneficial to West Tennessee.

Carlson's road to West Tennessee could be likened a bit to the story of Goldilocks because it took her trying a few places out before she found one that was the right fit. Growing up in Minnesota, it was two semesters at the University of Minnesota that were the final straw for this cold weather hating girl. Like many northerners looking to flee the cold, Carlson initially headed to the sunshine state of Florida but eventually she settled in the Lone Star state in Dallas/Fort Worth.

A self-proclaimed closet introvert, Carlson said ironically, she discovered that she actually loved interacting with people. She even did a stint as a flight attendant. Her entrance to personnel came when she applied for a concierge position with Four Seasons Hotels. "I had some background in benefits and that landed me a job in the HR department," she said. "I loved getting to hire people, watching their careers grow and develop as well as establishing ongoing relationships with them. Out of all that I adopted the mantra that I still hold today, to make a difference one person at a time."

In the midst of a thriving full-time career in the hotel industry that required travel as well as raising two children, Carlson decided to go back to school at night at the University of Texas in Arlington to finish her undergraduate degree. "I then took a position with Baylor Health Care System, which is today Baylor Scott and White Health," she said. "I spent eleven years with them in HR and really fell in love with healthcare while director of HR at their flagship hospital near downtown Dallas. I think I chose healthcare, or maybe it chose me, because of the difference we make in people's lives every day."

When contacted by a headhunter in 2012 about a position at WTH, Carlson admits the timing was right. Her youngest son was graduating high school and she felt she was ready to make the next step. "I worked with a VP at Baylor that had come from WTH and we worked well together, and I had a great deal of respect for him. He left Baylor to come back to WTH so I knew this had to be a great health care system," she said. "When I came here to interview, I was amazed at the friendliness I encountered not only at the hospital but everywhere I went. I truly felt that God had pointed me in this direction and opened this door. I am so grateful for the opportunity to get to work with people here and make a difference in this community."

Initially hired as VP of Human Resources, the title was changed to Chief HR Officer since that was more in keeping with what is happening in healthcare and across other industries. "Basically, everything that impacts our employees, or talent as we refer to them, falls under my purview," said Carlson. "The HR vision we put in place seven years ago when I came on board is the same today, to provide expertise and leadership in attracting and retaining top talent. The gift is getting to interact with people throughout their life. The fact that we have employees that have been with this system for over 40 years speaks volumes about what a special place this is."

Coming from one of the largest healthcare systems in the country to West Tennessee was an easy adjustment for Carlson. "Being responsible for human resources in healthcare has similarities everywhere. It is dealing with people, competition and workforce shortages," she said. "The biggest change actually was the best one, WTH is smaller and felt more like a family, which is so nice. But at some point, it's not a family, it's a business that serves half a million patients. On the personal side, the quality of life is so much better here because I am not spending two hours a day commuting to and from work. Overall this organization has been a perfect match for me, my values and what I believe is important."

Carlson felt she was given a blank canvas when she came to WTH that afforded her the opportunity to implement a change in approach and perspective to supporting the employee population. "We have implemented a lot of changes which can be a daunting task when you have such a large number of employees that have been with the system a long time and may not be used to or want change. Having an outside perspective has allowed new ideas on ways to influence the culture and bring a progressive approach to employee engagement and retention."

Change is what Carlson says is her legacy and one she is proud of. In her first year, WTH underwent a major benefit change when the system joined the Vanderbilt Affiliated Healthcare Network. This allowed for the addition of some aggressive consumer driven plans to be put in place. Due to this shift in design, WTH plan costs have not skyrocketed as they have for many other employers.

Another change Carlson is excited about is the increases in minimum pay that have been implemented. In 2016 the system raised their minimum pay to $9/hour. In June it will go to $10/hour. Employees making $12.50 an hour or less will see an estimated 5.5 percent pay increase. This increase will affect 1500 employees.

Although there are shortages across many areas, RN's comprise the biggest, despite the fact that the nursing turnover rate at WTH is below the national average. Carlson says they focus on retention and strive to be in the top quartile. She also sees relationships with colleges as a big part of the solution to finding talent to fill open positions across all areas

"We work closely with area community colleges and universities to hire their graduates and have programs that provide scholarships and training. Five years ago, we implemented a 16-week nurse residency program that exposes them to all areas of care to determine the ones they are most interested in," she said. "When I am out in the hospital, I am always talking to patient techs and aids to see if they would be interested in going to nursing school. We have upped our tuition reimbursement and even have loan and scholarship programs to help folks get their BSN degree."