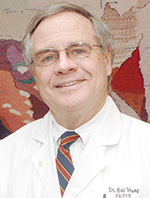 UNION CITY - Dr. Robert R. Young, obstetrician and gynecologist, has retired after 50 years of service. He was a founding member and began work at The Woman's Clinic in Union City in 1965. He was drafted and served in the U.S. Air Force from 1966-1968. He then returned to The Woman's Clinic in February 1968. In April 2014, The Woman's Clinic joined the Baptist Medical Group. A retirement celebration for Dr. Young is being held on Friday, March 16, from 2:00-4:00 pm in the tower conference room at Baptist Memorial Hospital-Union City.