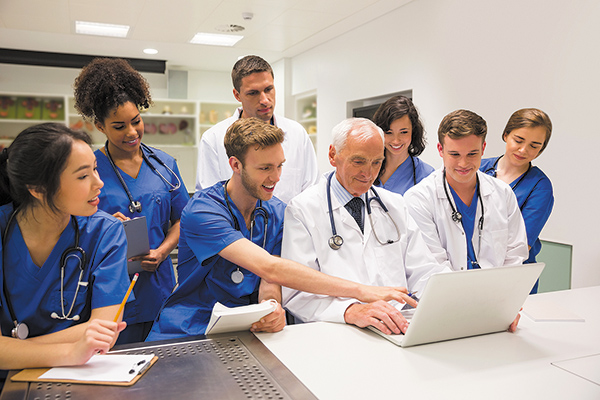 In 2013, the American Medical Association announced an ambitious effort to accelerate change in medical education. Starting with 11 founding medical schools on a mission to better prepare physicians to meet the future of medicine, the initiative has now grown to 37 participating schools. Yet, residency training has not mirrored those transformations ... until now.

The AMA recently launched a five-year, $15 million Reimagining Residency grant program to rethink how graduate medical education (GME) could best address the workforce needs of the current and future healthcare system, better support physician well-being and enhance preparedness to practice. It's the next phase in the AMA's quest to transform physician training.

"When we really looked deeply at the changes being made in medical schools, we realized we've brought these now thousands of students through changes in undergraduate medical education (UME) but hadn't changed residency," said Susan Skochelak, MD, group vice president for Medical Education with the AMA and the driving force behind efforts to transform the way physicians learn and train to meet the demands of a rapidly evolving healthcare system.

Skochelak said the first cohort of students who benefitted from curricular innovations are now interns. "Each subsequent year, there will be thousands more students coming through these new med school programs," she pointed out. Skochelak said the concern was there would be an implicit message that the training they undertook during medical school didn't really matter if they arrived at residency only to find no disruption in the status quo.

"The next logical step is to say it's a continuum of training and to bring these same principles and concepts of education forward to residency," explained Skochelak. "We want to make a better handoff - a better connection - from medical school to residency in terms of learning approach."

She added practitioners must take the important new concepts that are part of health system science and understand how quality, safety and patient-centered care are implemented in daily operations to ensure readiness for practice. Skochelak continued, "We want to support a positive learning environment ... not just for students but for faculty and staff, as well."

Building off the successful model used to transform UME, Skochelak said those chosen for the new residency grant funding will join an AMA-convened consortium. "The best way, we've proven, to accelerate the change is to bring people together in a community of innovation," she explained. The group will evaluate successes and lessons learned and work together to broadly disseminate successful initiatives to residency training programs across the country.

In late 2018, the AMA announced the new program. At the beginning of this year, the organization put out a call for innovative proposals with a bold vision to promote systemic change in GME with Letters of Intent due Feb. 1, 2019. Last month, that large pool was narrowed down to 30 applicants who have been asked to submit full proposals. Skochelak said she anticipates eight will be selected for funding with the announcement coming in June at the 2019 AMA Annual Meeting in Chicago.

The response has been tremendous. "We had more than 250 entities write Letters of Intent," Skochelak noted, adding the entries represented more than 300 organizations including state medical societies, specialty societies, consortiums, nonprofits and others. "We're really very intrigued with the fact that the response with the Letters of Intent was broader than just traditional residency programs. It says that people are really interested and excited to move forward with innovation and change," she added.

Skochelak said about 20 percent of the Letters of Intent addressed physician burnout. Other workforce issues including addressing provider shortages and ideas tied to the impact of social determinants were also recurring themes.

The eight proposals selected will share in the $15 million set aside to fund the initiative and will be divided up over five years. Like the medical school programming, Skochelak anticipates there will be a year of planning prior to implementation with these new residency learners followed over subsequent years. After selection, the eight institutional partners receiving grants will meet to agree upon standardized criteria for student assessment, resident selection procedures, onboarding and transitions, core curriculum in health systems science and common evaluation standards to measure performance.

No matter which eight are ultimately chosen, Skochelak said she is excited about the depth and breadth of ideas and the response from the larger medical community. "Clearly, it indicates we're in a climate where people know we can improve and do better, and they want to partner with others who can really help them reimagine residency," she concluded.