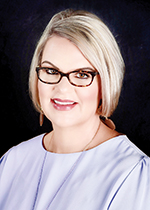 Psychiatric Nurse Practitioner, Anna Cook, is seeing firsthand the effects the pandemic is having on the mental health of West Tennesseans

Working on the front lines of mental health, Anna Cook, DNP, PMHNP, can attest to the fact that the pandemic's reach is beyond just those who contract the disease. As a psychiatric nurse practitioner in both an inpatient geriatric unit and in her outpatient private practice, Cook has seen a surge in demand for psychiatric services since the start of the pandemic and it is a surge that she does not see dwindling anytime soon.

The Mississippi native has over 14 years of nursing experience and five years of experience as a mental health nurse practitioner. Cook obtained a master's degree in nursing from Murray State University in 2010 and a post master's degree from Vanderbilt University in 2015. She is a board-certified Registered Nurse, adult Clinical Nurse Specialist and Psychiatric Mental Health Nurse Practitioner. She completed a Doctor of Nursing Practice (DNP) from the University of Alabama, Huntsville in 2019.

Cook started her career in cardiology where she found a passion for the geriatric population. She later began working in nursing homes offering psychiatric services, deciding then to pursue a post master's degree in order to specialize in mental health. Since that time, she has worked as a regional director for a company providing psychiatric services to long term care facilities in West Tennessee. Later, she began working part time at an inpatient geriatric facility in Martin, Tennessee. "I initially just worked two days a week at Unity in Martin, but realized how much I loved it and moved to four," said Cook. "I had always liked geriatric patients in general, but the more I worked with them, the more I found it to be so rewarding. I love spending time with them and hearing their stories. Additionally, being able to provide education and emotional support to families of loved ones with dementia is something I feel led to do. I am grateful to have the opportunity to help them in such difficult situations.

As a Psychiatric Mental Health Nurse Practitioner who holds a doctorate, Cook specializes in evaluating, diagnosing, and treating various mental health conditions. She splits her time between an inpatient geriatric program with Unity Psychiatric in Martin, Tennessee, and private practice with iMind Mental Health and Wellness in Jackson. One of her primary roles in both the inpatient facility as well as in her private practice, is to assess the medications a patient is taking and make recommendations. "Often the patient is on too many medications," she said. "Many times, patients are put on medications with the best intentions but when you look at what they take collectively, there are too many."

In addition to the medication aspect of psychiatry, Cook is also trained to provide psychotherapy for her patients. The clinic employs two Licensed Counselor Social Workers who handle most of the intensive therapy for patients. "When we opened the clinic, it was to offer something different than what was available in terms of mental health services in our community. The need was there, and we wanted to address that in a way that allowed us to determine the amount of time devoted to each patient," said Cook. "I try to get all patients in therapy because medications are just a part of treatment. We know the best outcomes are typically gained by a combination of both medication and counseling services.

Cook says that, even before the pandemic, the need for psychiatric services had been growing, but it has escalated since March, especially for geriatric patients as well as those that are dually diagnosed with intellectual and coexisting mental health disorders such as anxiety, depressions, and mood disorders. The lack of structure and routine, and increased isolation caused by the pandemic has taken a toll on this population. Depressive episodes are at an all- time high. The influx of new patients needing services has been overwhelming but we are doing our best to keep up.

"There are not a lot of outpatient resources as it is, and since we opened the clinic two and a half years ago, we had seen steady growth," said Cook. "Since the pandemic, it is almost like a crisis for the practice as we have seen such an increase in people in need of mental health services."

For the general population, things such as being unemployed, job loss, loss of insurance, kids not in school, working from home and having to teach virtual school as well as just being confined with family for months and months are major stressors said Cook. "People who are already anxious, don't deal with unknowns very well and with the pandemic there has been nothing but uncertainty," she said. "For patients with an underlying intellectual disorder such as autism, having their world turned upside down by the pandemic can be especially stressful as strive on structure. Constant changes in the rules and regulations has been especially hard on them. I am happy to work closely with Madison Haywood Development Center who are offering intensive outpatient group therapy "virtual classes" that help with coping skills, dealing with depression and anxiety and offering a social outlet for the patients. Even if the classes are virtual, the interaction with their peers has been a great resource. "

Cook says the geriatric population, especially those in nursing homes and assisted living facilities, has been hit especially hard by the pandemic. The inpatient unit has almost a constant waiting list due to the decompensation in patients that are now needing an inpatient hospitalization. "It has been awful," she said. "In the beginning, it wasn't as bad because no one knew how long it would last. As the weeks have worn on and people have been isolated from family, we are having patients coming in that have had a rapid cognitive decline. Some of them may have had some degree of dementia in March but now they are not able to engage at all and have completely shut down. I think it is due to the loneliness factor."

To mitigate the spread of the virus, many facilities would not let patients come out of their room, so it was as though they were in solitary confinement to some degree said Cook. "While it was in their best interest medically, it caused patients to decompensate," she said. "Treating them has been difficult as the guidelines change frequently. Isolation does not lend itself to dealing with advanced dementia, but we have tried to adapt and engage them as much as we can safely. I feel like the first week they are in the facility and they have to be isolated to ensure they are COVID free, we just cannot make a lot of progress but there is no way around it."

The inpatient facility in Martin is full and Cook says referrals are not slowing down. "We have been pretty slammed the past two months and there is no sign it is going to slow down. COVID caused us to make all our rooms private and that is something that is not going to change. We are adding two beds to our 14-bed facility in January due to demand."

For those dealing with COVID- related stress, Cook has this advice. "While we want people to stay informed, I recommend limiting media exposure to just a couple of times a day and from reliable sources that provide accurate information. Engage in self-care activities, eat a healthy diet and exercise, even if it is virtually at home," she said. "Try to avoid turning to things like alcohol or overeating in an effort to deal with stress. These are what we call negative coping skills that could result in further health problems. Know that it is okay to seek help and therapy to change your thought process or just to have someone to talk to. Set goals and how you plan to achieve them. Do not stop engaging in hobbies you like to do. Stay engaged with others through technology, especially with family members who may not be involved in holiday, social or family activities. Check on people especially if you notice a change in behavior or that they are more withdrawn. Often, someone will go in for what they think is medical treatment and it turns out to be depression related." I recommend medical clinics be more diligent in screening for depression and anxiety at routine office visits.

Cook, who has personally experienced COVID herself, says she has a whole new perspective. "I am being more vigilant about wearing a mask and encouraging others to wear one as well," she said. "Feeling stress and anxiety right now is normal, don't feel guilty about it. Big thing is to focus on what you can do to mitigate your risk of getting it. Stay on a routine as much as possible and make time for fun and relaxation."