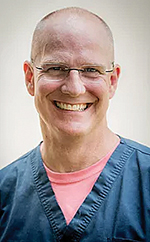 Watching rural healthcare decline around him, orthopedic surgeon Michael Calfee, MD, found himself with an opportunity to not only be able to provide the best care possible to the residents of Obion and surrounding counties, but to also provide them with access to care that they may have otherwise had to look to bigger cities to find.

In 2009, Calfee, who was practicing in Huntingdon at the time, had an opportunity to purchase a medical office building in Union City and took it, relocating his family to Union City as well. By 2012, he was practicing full time in Union City. "Before I came to Union City, there had been four orthopedists here, but that number was rapidly dwindling down," said Calfee. "I was pretty much the only one in town and my practice has evolved tremendously over the years."

When he made the move to Union City, Calfee envisioned hiring a partner and he added physical therapy to his practice. The growth he expected did not pan out which meant he did not need a partner. In 2016, he also closed the physical therapy side of his practice and discontinued the athletic trainer component. All of this was done to allow him to focus more on his strengths and his practice.

Just as doors were closing around his practice, one other closing in town resulted in a huge opportunity for Calfee. "In 2016, as I was closing down some of the elements of my practice, the Union City Surgery Center was also closing and I owned the building," he said. "I needed something in there to generate revenue, but it would require a partner. I started calling everyone to help me restart it. And it was going to be a heroic effort since I would also have to convince Baptist to let me re-open it."

Calfee's search led him to David DeBoer, MD, in Nashville. "His was a name I had heard forever because lots of people from the area were going to him, I approached him about helping me re-open the surgery center and he said 'yes,'" said Calfee. "It took a heroic effort to jump through all the hoops and to get Baptist Memorial Healthcare to let us re-open it, but we did."

Partnering with DeBoer, says Calfee, has been a blessing. "He is in practice with six orthopedic surgeons who were well experienced in total joint replacement surgeries," said Calfee. "We were able to draw upon their experience and evidence-based practices from Centennial Hospital in Nashville and replicating it in Union City. Since doing our first case in 2017, we have zero infection rate and our results have been really good. We have been tracking outcomes since day one. We typically have total knee or hip patients walking within an hour of their procedure and out the door in two, which is outstanding. People are happy and we are providing a really good service to our patients."

The center has done about 150 total joint replacement surgeries in the past three years. Calfee anticipates additional growth in 2020 since Medicare has approved outpatient total knee replacements in an ambulatory setting. "This has really helped these types of surgeries in an ambulatory setting take off," he said. "Literature such as Becker's Hospital Review indicates that in five years 50 percent of all total joint procedures would be performed in an outpatient setting such as an ambulatory surgery center."

In addition to podiatrists, Thomas Hodgekiss, MD, a pain management and regenerative medicine specialist is also a part of the team at the center. "He is an interventional radiologist that deals with pain management that does not involve narcotics. He also provides epidural pain treatments," said Calfee. "He does a lot of spinal cord stimulation for chronic pain and is having really good results. If he was not here, patients would be having to go to Nashville for this type of treatment."

"There was really nothing I cared about but orthopedics. In fact I was not really sure I was meant to be a doctor as I was to be an orthopedic surgeon. I really like to be able to help people, and it is pretty amazing what modern medicine orthopedics can do when we get it right," said Calfee. "I feel like rural healthcare is on the decline. Having the Surgery Center and bringing the experts we have been able to bring in, means we can still provide a high level of care in the rural setting. I truly want to take care of the people of Obion County and surrounding areas as best I can."