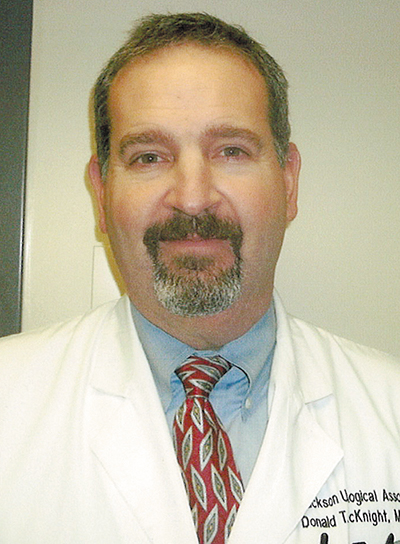 Zapping kidney stones by day and rocking the town at night composes the perfect duet for urologist Don McKnight, MD. Whether seeing patients at Jackson Urological Associates, playing one of his five guitars with his band the Double Wides or writing and performing original music, McKnight is finding the perfect mix of healing arts and musical arts.

The musical side of McKnight started developing in grade school when, as is the case for many kids, his mother made him take piano lessons. In high school, he thought the guitar would be a cool instrument to play so he saved up his allowance from working on his father's farm to buy a guitar and taught himself to play.

Though he grew up working on his family's farm in Parkin, Arkansas, McKnight never had an interest in making it his career. "Science really appealed to me as did the thought of working with people," he said. "I had an uncle who was an ophthalmologist in Little Rock, he practiced until he was 77 and very dedicated to his patients. He was a character and I enjoyed being around him. I thought that if this the kind of people in medicine, this is for me."

While in college at the University of Arkansas, McKnight worked as an orderly in a hospital in Winn, Arkansas which galvanized his resolve to be a doctor. McKnight earned his degree in zoology in just three years and entered medical school as one of the youngest in his class at UT Health Science Center in Memphis, Tennessee.

Although McKnight initially thought he would join his uncle in his ophthalmology practice, his rotations in med school changed his mind. "I found I liked internal medicine, gastroenterology and surgery," said McKnight. "Part of surgical rotation had me spending two weeks in urology. The residents had so much fun while working hard and it made me think there was really something to this. And thus, the decision was made."

After medical school, McKnight headed to Augusta, Georgia to complete his residency training in internal medicine and urology at the Medical College of Georgia. While in residency, McKnight and his first wife had their first two children. Following his residency, he and the family moved to Jackson, Tennessee where he joined Jackson Urological Associates and the McKnight family grew by one more.

"I never thought we would come to Jackson," said McKnight. "I really thought I would be in Oak Ridge but then I found this practice that Drs. Yarbrough and Burleson had started. They needed someone and the more we talked, the more I realized this was the exact situation I wanted to be in. A good practice in a smaller town that would be a great place to raise my three kids."

After almost 26 years of practicing urology, McKnight still finds the combination of surgery and medicine the specialty offers to be really interesting. "I liked it at first because it offered the opportunity to do surgery without the busy night schedule a surgeon typically has," he said. "And after all these years that holds true, just that we have gotten so much busier. With the patient population growth this practice has experienced, we are all working as hard as we can these days."

Robotics has played a part in the growth of the practice since 2009. "Dr. Lawrence and I really got behind the technology and realized it was something we needed here in Jackson," said McKnight. "At the time it was pretty cutting-edge technology for our specialty and we were the first two to be trained in it in this area. It has many applications for urology patients and is what we use in about 99% of prostate cancer cases."

The musical side of McKnight has also grown since coming to Jackson. "I've taken guitar lessons, learned to play bass, was part of a band made up of all doctors and now have five guitars, an electric bass and an upright bass which looks sort of like a cello just twice as big and produces lower notes," he said. "I wish I had stayed with the piano when I was younger since it seems to be a lot more popular when you are 50 than 18. I understand music but still have to practice quite a bit."

"Besides playing for my church twice a week, I helped form a band called the Double Wides. We thought it was funny and it was either that or Three Cow Garage. We play mostly rockabilly and Americana style music as well as some covers, plus we have written and recorded several songs. Our EP is available for streaming on reverbnation.com. We play around town a couple times a month and hope to expand that to out of town as well."

McKnight remarried three and a half years ago. His wife Tracey is from Tullahoma and runs the pre-admission testing department at an area hospital. Four of their children have graduated college. The youngest attends UT-Knoxville.