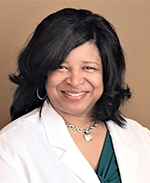 JACKSON - Mechelle Taylor Moragne, MD, PhD, has been named the winner of two silver Stevie® Awards in the Female Entrepreneur of the Year- Business Services and Frontline Medical Hero categories in the 17th annual Stevie Awards for Women in Business.

The Stevie Awards for Women in Business honor women executives, entrepreneurs, employees, and the companies they run- worldwide. The Stevie Awards have been hailed as the world's premier business awards.

Winners will be celebrated during a virtual awards ceremony on Wednesday, December 9.

More than 1,500 entries were submitted this year for consideration in more than 100 categories. Moragne Founder/Executive Director of Taylor Medical Center, won in two categories: Female Entrepreneur of the Year Business Services-10 or Less Employees and new category, Frontline Medical Hero of the Year.

Moragne has been a pillar of the Jackson medical community for more than 15 years. She is the owner of Taylor Medical Center and is dedicated to the health and wellbeing of her patients.

Moragne grew up in Memphis. She matriculated at both Fisk University and Meharry Medical College in Nashville. At Meharry she was the first African American female to earn both the Ph.D and MD degree.