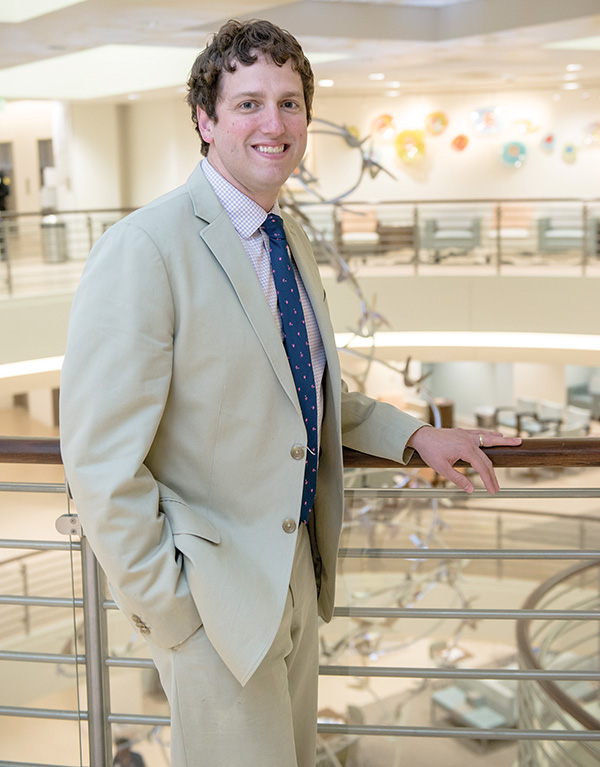 Dr. Michael Ulm's mission in West Tennessee is to not only treat cancer as an oncologist, but to prevent 6 types of cancer through an HPV initiative

As a bright-eyed freshman at Rhodes College, Michael Ulm, MD, saw four years ahead of football, baseball, a political science degree and no idea what would come next. A volunteer opportunity during college showed him that while science was in his future, it wasn't of the political kind. Much like a politician though, the gynecologic oncologist at the West Cancer Center and Research Institute does have an agenda, to provide the best care to his patients across Memphis and West Tennessee while also raising awareness of the importance of the HPV vaccine.

Midway through his sophomore year, Ulm, a native of Lilburn, Georgia, was volunteering at Piedmont Hospital in Atlanta and had the opportunity to shadow various physicians and surgeons. "I found it to be interesting, stimulating and thought maybe this was something I would enjoy," said Ulm. "While I was still a political science major, I took the MCAT my junior year knowing that I would have to complete additional course work after graduating."

Ulm headed to Tulane to pursue a Master of Science degree in Human Genetics. The one-year program allowed him to finish up some educational courses and be in the medical community doing research with a genetic counselor. The degree also provided a fall back option of science research should medical school not pan out.

Medical school was an option and Ulm returned to Memphis, completing his medical degree at the University of Tennessee College of Medicine in 2011. "I initially thought pediatrics would be my specialty, but in my third-year rotations I discovered I really liked OB/GYN, despite the fact I said it was something I would never do," said Ulm. "By the end of my third year, I knew it was for me and completed my internship and residency in Obstetrics and Gynecology at UT- Memphis."

During his residency, Ulm found inspiration and encouragement in oncology. "In obstetrics patients are usually healthy - oncology is the opposite - but I found that I really enjoyed that type of patient. They have had to face mortality in ways we haven't and have a great perspective on life," he said. "Oncology offered a mix of basic science, chemistry, surgery and critical care. Oncology physicians are those who have to be comfortable in many realms, which was exactly what I wanted to be."

With oncology a relatively competitive arena, many residents apply to do an away rotation at one of only a handful of programs which allows them to be ranked and scored compared to other residents. As a Felix Rutledge Fellow in Gynecologic Oncology at the University of Texas MD Anderson Cancer Center, Ulm spent a month focused on the specialty. "It really solidified that this is what I wanted to do," he said. "It was a mini-residency of sorts. We got to scrub in, operate, round and see patients in the clinic."

With his wife in her surgical residency in Memphis and their desire to start a family, Ulm knew Memphis was where he would do his fellowship training. At the time though, the West Cancer Center and Research Institute was in the process of developing a gynecologic oncology fellowship program with UT Health Science Center. To fill the gap and have an opportunity to hone his surgical skills, Ulm completed West's one-year fellowship in female pelvic and reconstructive surgery. In 2019, he completed a fellowship in Gynecologic Oncology at West Cancer Center and Research Institute.

After that fellowship, Ulm joined the West team as one of five gynecologic oncologists on staff. While he spends most of his time in the Germantown location, he sees patients in the Jackson office two days each month. "The West Cancer Center and Research Institute was the right place for me, and one filled with the right people," said Ulm. "Many of those were great mentors to me who take an interest in educating and molding doctors equipped to take care of our patients."

The Centers for Disease Control predicts HPV infections will cause more than 30,700 cancers in men and women every year. Both boys and girls between the ages of 9 and 14 years old should receive the vaccination series against HPV, but it can be administered up to age 45 and after patients become sexually active.

Ulm's interest in HPV and promoting the importance of vaccinating for it came from an encounter during his fellowship. "I had a patient who was 25 and had five children who had been diagnosed with cervical cancer," he said. "All I could think was how is this happening? The vaccine for HPV had been out 10 years at that time. Had this patient been vaccinated she would not be dealing with cervical cancer."

Cervical cancer is the fourth most frequent cancer in women, and the World Health Organization estimated that there were over 500,000 cases in 2018. In England, the National Health Service (NHS) instituted a universal HPV vaccination program that offers all boys and girls ages 12-13 the HPV vaccine in school. In 2008, the year the vaccination program launched, 15 percent of young women in England were infected with HPV. A decade later, Public Health England (PHE) released a report showing the infection rate dropped to 2 percent in ages 16-18 years between 2014 and 2018, and in a sample of 600 young women tested in 2018, zero infections were found. This data indicates the vaccination program is successful for the reduction of HPV infections, and thereby reducing the risk of cervical cancer.

England is not the only country to experience huge success from an HPV vaccination program. Scotland's HPV vaccine program has seen similar success and Australia is on track to becoming the very first country to eradicate cervical cancer within the next two decades.

Ulm is married with two girls under the age of two. He met his wife, also a Rhodes graduate and a surgical resident while applying to medical school. Balancing practice, residency and kids keeps the Ulms busy, but they do find time to enjoy the many great eating establishments Memphis is famous for and time with friends and family. Ulm is also an avid runner.