Leading Through the Team 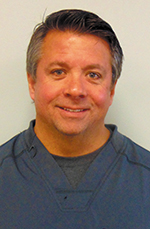 It would seem change is not something Andrew Jackson readily embraces. Outside of college, he has always lived in the same hometown. He has only worked for one company his entire career. And he even plans to drive the same car until it hits 500,000 miles, a goal he is well over halfway to achieving. Even taking on the role of Director of Rehabilitation at Baptist Memorial Hospital in Union City only meant a slight change for the physical therapist because he now balances his administrative duties along with clinical ones.

Jackson has always called Dyersburg home. His grandparents had a pediatric and family medicine office in their home in Dyersburg. His grandfather was the doctor, his grandmother the nurse. His uncle is a surgeon and his aunt is a pediatric nurse practitioner. With so much medical influence on his life, Jackson headed to Freed Hardeman University in the Fall of 1991, with a goal of doing something in the medical field.

"I wasn't sure medicine was what I wanted to do. While in college I felt like physical therapy (PT) may be a better fit for me," said Jackson. "I started volunteering in a PT setting, and the more I was around it, the more I knew it suited me better than medical school. After graduating college in 1994, I went to PT school at UT-Memphis and earned my Physical Therapy degree."

It was during his last clinical rotation in the Fall of 1996, that Jackson's career with the Baptist Health System began. He was assigned to the Baptist Hospital in Union City and was hired to work there after graduation. Initially he worked in the hospital setting but space was limited and as the outpatient population continued to grow, a new outpatient clinic was opened. Jackson moved to the larger 5000 square foot space when it opened in August of 1998.

"Initially, there were just two physical therapists; one was the director and I was the other one. Since then, we have grown to four PT's and five physical therapy assistants," said Jackson. "In 2016, speech therapy was added to our service line when we hired a speech and language therapists. Today, due to growing demand, we have two full-time SLP's on staff."

Shortly after the outpatient physical therapy clinic opened, Jackson was approached to take on the role of manager for the clinic. "The director of rehabilitation had been with the hospital for over 15 years. She was a practicing PT in the hospital and oversaw things there as well as at the clinic," said Jackson. "My role as manager only took up about 25 percent of my time. The rest of the time was still focused on patient care. I handled the budget for the clinic, staffing, equipment purchases and expansion of services."

Two years ago, when the opportunity to take over as director of rehabilitation came his way, Jackson said it was more of a flip than a change. "When the director retired, it was an easy transition for me to step into the role. With the majority of my clinical practice being on the outpatient side, I stay at the clinic but still oversee the rehabilitation services at the acute care department," he said. "I split my time between the hospital and the clinic with one day devoted to just director responsibilities. The other days are clinical days with one afternoon being in the hospital department seeing patients and the rest of the time I am in the outpatient clinic seeing patients."

When asked how it is to be in the clinic but also overseeing the hospital department, Jackson gives all the credit to the staff for making the situation work. "They are phenomenal, professional, caring people. When you have good people working with you and supporting you, it makes the director role easy," he said. "We really are all a team and I feel like I am a team member, who just happens to be a director. I am pretty laid back and a good listener who loves to serve. Being available to patients and employees is very important to me and I feel like it's an area I excel in."

Although it is considered a rural healthcare area, Jackson says they have therapists trained in specialty services such as lymphedema therapy, mechanical diagnosis and therapy (McKenzie method) and two that are trained in the LSVT (Lee Silverman Voice Treatment) used with Parkinson patients dealing with voice impairment. While the majority of their patient population is surgical orthopedic patients, they are also set-up to see any other type of patients that need their services.

"We keep our ears to the ground for opportunities to expand and grow our service lines to meet the needs of Obion County. Based on communication within the community and other providers in area, we gauge what direction we need to head," said Jackson. "We added speech therapy based on requests from local physicians. We also knew no one in the area was providing lymphedema or LSVT therapies so we had some therapists trained so patients would not have to travel out of town for those therapies."

The limitations insurance places on the number of visits for patients has been a challenge but has also caused the staff to be more focused on patient education and involvement. "We don't have an unlimited amount of time to see a patient, so every interaction with them has to give them tools to get them involved in their treatment at home," said Jackson. "We also have to make a bigger difference in a shorter amount of time."

Being a part of a large healthcare organization has its benefits - one being a tremendous support network. "There are a number of rural facilities in the Baptist family which means a network of folks facing the same challenges we do. I correspond daily with many of them by email and we meet monthly to share information. Most of the rural directors are still hands on clinically, so our roles are very much the same," said Jackson, "I am also very fortunate to work for an administrator who is very supportive of our department and attentive to any issue we take to him."

Working in Union City and living in Dyersburg with his wife and two kids, Jackson says it's as though he has two homes. "I grew up in Dyersburg and love that our children will too. I am also very blessed to have worked for 20 years with people who have become like family to me," he said. "Family and faith come before anything else."