Inspiring Passion for the Art and Science of Medicine 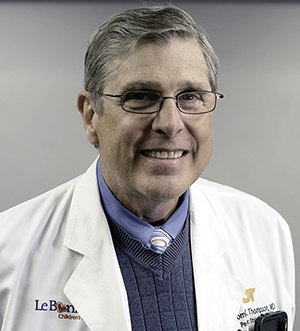 As a UT faculty member and father, LeBonheur's Dr. Jerome Thompson is transferring the legacy of the man who inspired him to others

Being inspired by others led Jerome Thompson, MD, to pursue medicine. From following his orthopedist around in a wheelchair, to Neil Armstrong, to meeting the father of pediatric ENT, all impacted Thompson and his love for the healing arts. Today, in his role as division head of Pediatric ENT at Le Bonheur Children's Hospital, as well as that of a father, Thompson is inspiring others with his love of medicine.

Growing up in Memphis, the son of a military father and a mother who was a nurse, Thompson attended, what he calls, some of the best public schools in the country. At age 13, his family relocated to Los Angeles, and when he registered for school Thompson tested high enough to skip seventh grade and move to the eighth. His mother was so happy she decided to bake a cake, a decision with significant impact.

"She was heating up Crisco in a skillet and it caught fire. She ran out the back door with a flaming skillet and we ran into each other. I had on nylon pants and cotton socks, which caught fire. I ended up with second and third-degree burns and in a military hospital on the Air Force Base right in the middle of all the enlisted patients," he said. "Since it probably wasn't in my best interest as a teenager to be spending all day with a bunch of military men, my orthopedist let me be his scribe. He rigged up a desk that sat across my wheelchair and I rolled around behind him with a stack of charts and he dictated his notes to me. It was what inspired me to go into medicine."

That inspiration was further fueled when Thompson won a NASA Environmental Research Award for his self-contained life system that allowed a hamster to live underwater for a month. "It was my senior year and to say the least I was a nerd, and some would say I still am," said Thompson. "Astronaut Neil Armstrong was one of the judges and presented the award to me. He told me I needed to be either in science or medicine."

Thompson graduated with a degree in zoology from the University of California, Riverside, which was near the military base where his family lived. The University of California Los Angeles was where he got his medical school training as well as completed his internship and residency. While rotating at LA's Children's Hospital Thompson met the man who was the father of pediatric otolaryngology. "I fell in love with the pediatric airway," said Thompson. "Fixing problems is what I love about this specialty. In pediatric ENT, almost every patient you treat gets better, whether that involves medicine, surgery or just an examination."

After completing his fellowship in pediatric otolaryngology at Los Angeles Children's Hospital, Thompson entered private practice then joined the faculty and staff at the University of Southern California Medical Center. He trained medical students, residents and fellows. "We did everything from oncology, airways and typical ENT cases," said Thompson. "It was a wonderful time in my life."

While he was an attending and a faculty member, Thompson met his wife who was an ICU nurse. "We were both workaholics. She invited me to coffee, but I did not have time," he said. "Then I asked the charge nurse if I could take her out, fortunately she said yes. I knew on the first date I would marry her."

In the mid '90's, LA was a rough town and not where Thompson wanted to raise his four children. "In a five-year period, you had a 50/50 chance of being a victim of a violent crime. With riots, we just knew it was time to go," he said. "In 1994, a colleague told me there was a position here for a pediatric ENT that included a faculty position at UT Health Science Center. I knew of Le Bonheur's reputation, we loved the city and made the move."

Thompson says he came to a great hospital in a growth phase. "Initially, I was the only pediatric ENT. Since then the department has grown substantially. We have added five more faculty positons and a nurse practitioner. We have also added a fellowship position." he said. "The equipment we have is better than what most university hospitals have."

To say he is passionate about medicine is an understatement - his love for the healing arts has spilled over into his children, two of which are already doctors. "One is a pediatric intern at Le Bonheur and the other is an OB/GYN intern," he said. "Growing up they would either be dissecting road kill or trying to save an injured animal in my garage. They even nursed an injured fawn that had been hit, giving it IV fluids, taking its temperature, bandaging it, the works."

The younger two children will also take medical paths. One is doing a year of research for Le Bonheur while applying to medical school. His youngest child, a son, plans to head to college this fall to play lacrosse and pursue a degree that will put him on the path to be a Certified Registered Nurse Anesthetist.

Besides passing on his love for medicine, Thompson shares his passion for hot rods and restoring them with his son. "I have a 1929 Ford Roadster that we are working on now. It has a '68 Corvette engine in it," he said. "We don't have much time to work on it but need to get busy on it this summer before he heads off to college. It's going to be cool one day."