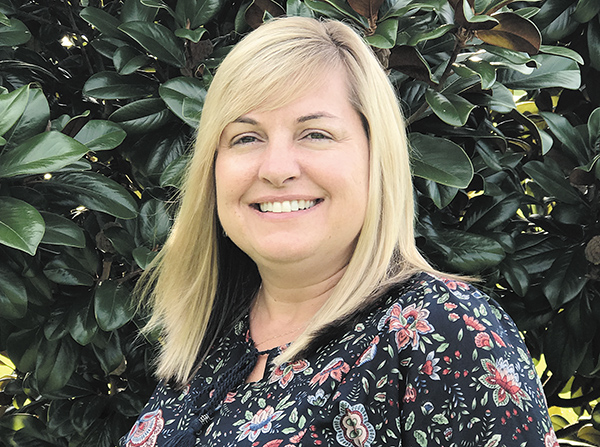 Going from a hospital to a clinic setting can be quite a change. For Amanda Longworth, that change in venue brought growth with a heightened work ethic, to becoming an expert implementor.

For most of her life, West Tennessee has been home for Longworth. At age 11, she moved to Crockett County from Chicago. Years later she completed the medical assistant program at West Tennessee Business College, then in 2001 earned an Associate Degree in Accounting/Business from Arkansas State.

In 2002, Longworth and her husband returned to West Tennessee where she took a customer service position in the business office at Jackson Madison County General Hospital. She then moved to the insurance department where she followed up on insurance claims with Medicare and other health plans. Five years later she took the same type of job at Jackson Regional. She became the lead in her department overseeing a team of ten employees, ensuring they met daily quotas and assigned other projects as needed.

After six years and in the midst of rumors that Jackson Regional may be closing or merging, Longworth feared her job may be on the line. "Although it turned out that a lot of that was just talk at the time, it did give me a chance to sort of re-evaluate things," she said. "And I realized I really wanted to work in a smaller more family friendly environment. A friend who used to work at Lentz Pediatrics told me there was an opening for an office manager there and encouraged me to apply."

Jonathan Lentz, MD, opened Lentz Pediatric clinic in Lexington in 2008. The Jackson office opened later that year. Besides Dr. Lentz, the clinic began with two Nurse Practitioners. Today that number has grown to five. The Lexington office has ten exam rooms, a staff of nine and averages 40-45 patients a day. There are plans in the works to expand the Jackson office which currently has four exam rooms, six staff members and averages 30 patient visits daily. Longworth splits time between both offices and is responsible for hiring, training and managing non-clinical staff as well as scheduling clinicians.

"Being a manager seemed to come naturally to me," said Longworth, "When I was one at the hospital there were more layers to work through but here it's only Dr. Lentz, so it seems a bit easier to get things done or issues resolved."

While it was a different setting and her role was not solely focused on insurance, Longworth was ready for the challenge and saw opportunities to make a positive impact. "Initially our billing was outsourced, and it was quite expensive. I had to wrap my head around it all, then show what it would mean to the clinic financially to have this done internally," she said. "From my experience in insurance at the hospital, I knew there was no incentive for an outside person to really work the claims. If they didn't get a denied claim reversed, it was not really going to impact them. Having this done by a person internally helps us to know that person is invested in those claims being processed correctly and followed through on, especially for denied claims. This was where in-house billing could impact the clinic financially."

Bringing the billing in-house required more than just another employee. It also meant purchasing an entire new billing system and software for the clinic. "Since insurance payments are vital to the clinic, this new system had to have a seamless implementation," said Longworth. "While it was a little nerve wracking, it went great and we did not miss one payment in the process."

Billing wasn't the only thing Longworth identified the value of having in-house. "Lexington is part of a rural area health clinic (RHC) which means that it is located in a rural, medically under-served area in the United States that has a separate reimbursement structure from the standard medical office under the Medicare and Medicaid programs," she said. "There are specific government rules we have to follow, and we have to file quarterly to receive our monies. Initially we worked with a company to help us get that established. There was a lot of paperwork required to identify quarterly how many visits are primary TennCare and those that are secondary TennCare. There are also annual compliance audits. Now we do it all in-house which has saved us a substantial amount of money."

Longworth also recognized an opportunity for growth through a state program called Vaccines for Children, which she implemented a few months after she came on board.

"This is a program that allows you to give vaccines to TennCare patients," she said. "Without this program we could not give vaccines, so patients would come here for a check-up then have to go to the Health Department for their vaccines which was not convenient for the patient. By enrolling the clinic in the Vaccines for Children program, we can give vaccinations at both offices, which for pediatrics is a big thing. Since implementing this program, we have seen tremendous growth, with our Jackson office probably seeing the most."

Change of any kind can be tough and Lentz Pediatrics is not immune to it but when faced with it, Longworth tries to make the transition as smooth as possible. "When we swapped over to a new EMR in 2018 due to government mandates, it meant not only a new system but switching from one that was server-based to cloud based," she said. "It took about six months to get the EMR pediatric friendly for our providers."

ICD-9 change over to ICD-10 was also a big adjustment that required heavy involvement on Longworth's part. "Under ICD-9 a diagnosis had a number associated with it. ICD-10 uses a combination of letters and numbers," said Longworth. "To try to lessen that change, I went in and tweaked our system to make it more user friendly for our clinicians. Dr. Lentz is not one for change, so I try to make it as easy and convenient for him when it happens.

One of the biggest issues Longworth says she deals with is finding qualified people to fill non-clinical positions. She attributes this in part to many young applicants lacking the desire to work. "I try to find someone who has worked somewhere else, such as in a hospital or nursing home, and can appreciate not only having a job but one that has normal work hours.

Longworth has been married for over 20 years and has two grown sons. She and her husband enjoy traveling, taking cruises, seeing the St. Louis Cardinals play and spending time with family.