From Surfer to Southern Surgeon 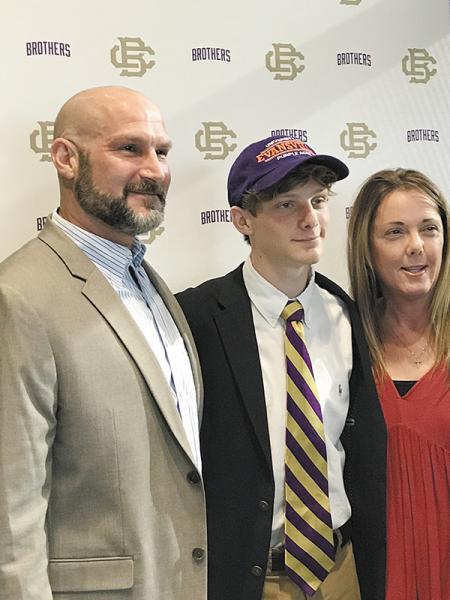 Dr. David Pearce, pictured with his son and wife, will get to watch his son continue his soccer career at the University of Evansville.

From surfing the waves of Southern California to diving into orthopedics in West Tennessee, David Pearce M.D. is dedicated to bringing cutting edge sports medicine to his patients.

From surfing the waves of Southern California to diving into orthopedics in West Tennessee, David Pearce, MD, is dedicated to bringing cutting edge sports medicine to his patients.

Growing up in San Diego, California, Pearce suffered from asthma, but it was watching his little sister struggle with the condition that left him feeling scared and helpless that inspired him to help others by pursuing medicine. When he tore his ACL in college playing intermural football, it was care he received from his orthopedic surgeon that impressed him enough to consider orthopedics.

"Dr. Robert Kerlan was an interventional radiologist at a hospital where I interned while in college at the University of California San Diego studying physiology. He became my mentor and even helped me get into medical school," said Pearce. "His father was a ground-breaking orthopedic surgeon who started one of the first premier orthopedic groups in the country, the Kerlan-Jobe clinic that treated many of the major athletes in the country from the 1970s-1990s. While Dr. Kerlan did not want to follow in his father's footsteps, he could sense that orthopedics was for me. When I said I wanted to do interventional radiology, he said 'no, you are an orthopedic surgeon,' something my orthopedic rotation in medical school confirmed."

When applying to medical schools, Pearce landed an interview at Georgetown University's School of Medicine. While the East Coast was somewhat of a culture shock to him, Pearce found our nation's capital amazing and the old school culture of the school attractive. "It was definitely a different medical community than what was in California," he said. "Georgetown had a 'take no prisoners' atmosphere in that they were here to push you to be the best you can. My interviewer asked me if I surfed. When I said 'yes', she said well here you won't have time for it so better give it up. She also told me that if I wanted to be the best damn doctor I could be, then I had better come to Georgetown."

Pearce took his harsh interviewer's advice, gave up surfing and came to Georgetown for medical school. "She ended up being my mentor. When my girlfriend of seven years broke things off, it was my mentor that picked me up, dusted me off and told me to get back on my feet," said Pearce. "At the age of 84, she is still at Georgetown and screens all the applicants. I ran into her last Fall while visiting with my family. She took the time to talk to my kids for over an hour and even discouraged my son from applying to Georgetown for college."

Residency took Pearce a little South of our nation's capital to Richmond and the Medical College of Virginia. If the East Coast did not have a hold on him yet, it would now, as he met his wife who was from New Orleans while in Richmond and as he puts it, life has never been the same.

After completing his residency, Pearce headed to Philadelphia to complete his sports medicine fellowship where he was able to consult with the Philadelphia Phillies baseball team. "It was tedious covering a major league team for 162 games each season," said Pearce. "I would operate all day then go to the stadium to check on the players that needed to be examined before the game. If there was a rain delay, it could be after midnight before I could leave and still have to be at work early the next morning."

When he completed his fellowship, Pearce moved to the outskirts of Cincinnati and went into private practice with another orthopedic surgeon. While he still consulted with the Phillies when they played in Cincinnati, the practice was not as busy as he wanted, so he started to look for a new practice. His search led him to West Tennessee Bone and Joint in Jackson, Tennessee, which also put his wife closer to her family in New Orleans.

"West Tennessee Bone and Joint was looking to grow and expand and was providing excellent care. They were wanting to be the leader in cutting edge sports medicine in the area and I brought a great skill set to the table. After I joined, they continued to bring in more fellowship trained doctors which brought in new techniques that helped the practice really take off in terms of growth."

A sign of that growth is the clinic's addition of a second office in Jackson that was a result of the expansion of the Physician's Surgery Center. "It was funny that when the new space opened, many of my partners and I did not want to go," said Pearce. "Not because we did not like the space but more that we enjoy the comradery we have at the main office. It really affirmed what our practice is all about, individual physicians who practice collectively in a supportive environment to provide the best care for our patients."

After 17 years in practice, Pearce says one of the biggest challenges in sports medicine can be managing expectations, especially those of parents of athletes. "It can be a 24/7 job managing an athlete's recovery and rehabilitation and what the parents expect to happen," he said. "We want to get them back to playing but sometimes it is hard for parents to be patient in the process it takes to get them healed, rehabbed and back to playing. This can be taxing on both the athlete and the parents, so a large part of my job is working with the trainers and therapists to keep the athlete encouraged and everyone on the same page. I practice tons of medicine on my phone texting with trainers and the PT's working with these athletes.

While Pearce practices in Jackson, he and his family live in Lakeland, so their children can attend schools in Memphis. "Our boys have grown up playing soccer and were playing at a higher level than what was in Jackson, so a few years ago we moved," said Pearce. "While I have about an hour commute each day, it is still better than what I had growing up in Southern California."

With his oldest son headed to the University of Evansville (Indiana) Honors program and to play Division I soccer, Pearce is hopeful that he will follow in his footsteps and pursue medicine. "He has spent time at the office and loves both the clinic side and the surgical side of things," said Pearce. "We also have a junior at Christian Brothers High School who plays soccer and a daughter who will be a sophomore at St. Benedicts in Memphis."