From India and Up and Down the East Coast, Cardiologist Nirav Patel Finds Jackson Home 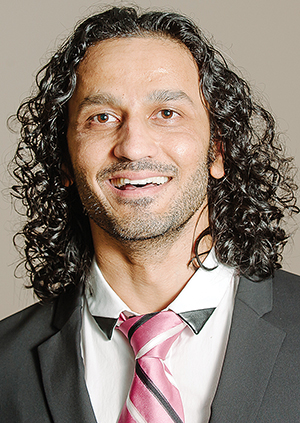 Constantly looking for ways to improve is part of the process of being the best for Dr. Nirav Patel

Striving to do his best and be first has been the life-long mantra for Nirav Patel, MD. Growing up, it drove him to be the first in his class and the first in his family to enter the medical field. Along the way, Patel has learned that one of the biggest parts of striving to be your best, is constantly looking for ways to improve. A lesson he puts into practice, both in his personal life and as an interventional cardiologist, at the Heart and Vascular Center of West Tennessee.

Growing up in India under a merit-based educational system, Patel's success in the classroom afforded him his choice of what field he would pursue. "From the third grade until the twelfth, I finished at the top of my class so I had my pick of what I would study in college," said Patel. "I was thinking either medicine or computer science but was drawn to medicine since it is one of the most respected and reputable fields I could enter. I was the first in my family to enter medicine and I guess I lit the torch for my siblings. My brother went to medical school two years after me, and my sister went into pharmacy ten years later."

Throughout his medical training at M S University of Baroda Medical College in India, Patel began to pursue training in cardiac and heart-related fields. As he graduated medical school in 2002, he decided to pursue training in the United States and began preparing to take the U.S. medical entrance exams. He came to America in 2003 and matched with his first choice, an internal medicine residency at the Medical College of Georgia in Augusta.

"It was the best place with some of the best patients you could care for. The attendings were also outstanding as were the other residents. I loved it so much and learned so much that when the opportunity came to be the chief resident there, I took it even though it was more of an academic and administrative position," said Patel. "I then completed a fellowship in cardiovascular medicine there from 2009 to 2011. It was one of the best times of my life in terms of education, learning and advancing my medical and cardiology-based training."

In keeping with his desire to improve and be the best, Patel sought further training with a one-year fellowship in interventional cardiology at Maimonides Hospital Medical Center in New York. "Working with MCI and heart attack patients to improve their life and prolong the quality of their life," he said, "gave me tremendous experience in the field of interventional cardiology because I got to really get my hands and feet wet with lots of procedures. I learned so much since it was a very busy community hospital in Brooklyn."

In 2012, as his interventional cardiology fellowship was drawing to a close, Patel began interviewing for a full-time practice location. Having experienced Southern hospitality and a warmer climate while in Georgia, Patel looked below the Mason Dixon line for his permanent home. The Heart and Vascular Center of West Tennessee and Jackson were where he decided to put down roots.

"I had a friend that I did my residency and cardiology fellowship with who was also coming here," he said. "And while a lot has changed, personally and professionally for me as well as in terms of the local medical landscape, if I had to do it all over again, I would still pick Jackson and this practice."

While he primarily practices in Jackson, Patel rotates through the satellite clinics in McKenzie and Adamsville. He also serves as the CEO of the practice's vascular lab at the clinic location in Dyersburg which opened in the Fall of 2018. "We recognized a tremendous need for this lab due to the vast amount of severe peripheral artery disease we were seeing. There were all these patients who were undertreated/underdiagnosed with vascular problems which could ultimately lead to amputations when the disease advanced," said Patel. "We have also had to raise community awareness and education on this disease because many do not know what it is or that it needs to be addressed."

Outside of work, family time is important to Patel who is the father to a nine-year-old son and a four-year-old daughter, both of whom he describes as feisty and wild. For about five months out of each year, Patel's parents from India live with him, which he says is a treat since his mom takes over the cooking. "They also spend some time each year with my brother in Kansas City who is also a cardiologist, as well as with my sister in London," he said.

An avid reader, Patel likes to unwind at night reading. He mostly chooses spiritual and well-being types of books or ones that are business related. He also has a love for football, especially the NFL and the Seattle Seahawks. Travel is another passion of Patel's and he loves to getaway even if it is just for a couple of days. "I have traveled to European and South American cities," he said. "Florida is also a great getaway because I love the water, even though I don't know how to swim. I love to watch the waves."

Looking back, Patel says he couldn't do anything else. "I always think we can improve in how we take care of our patients, especially those with complex vascular problems," he said. "I love cardiology and cardiovascular medicine as a whole. Looking back, this is the best thing I could have done."