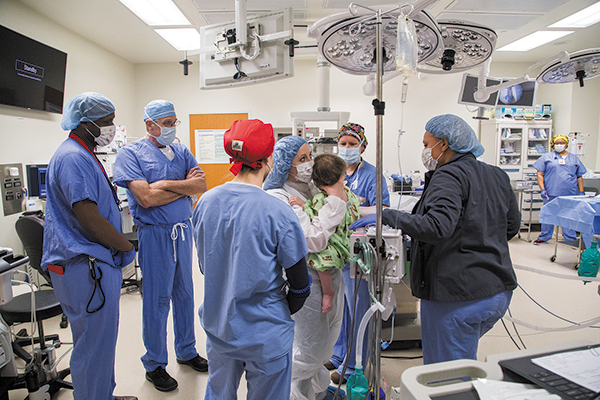 Cooper Kilburn is the center of attention.

Le Bonheur Children's Hospital reports that Cooper Kilburn, a 2-year-old from Adamsville, Tennessee, is making an excellent recovery after doctor's there successfully completed the reconstruction of an airway and voice box last month.

It is believed to be the world's first successful surgery of its kind.

A team of pediatric experts, led by Le Bonheur and University of Tennessee Health Science Center otolaryngologist Jerome Thompson, MD, used a rib graft to create a voice box and establish a viable airway for Cooper.

When his mother was 16 weeks pregnant with Cooper, she was in a car wreck that prompted her to visit the obstetrician for an ultrasound to check on her baby. The ultrasound revealed fluid was building in Cooper's chest because of a rare condition - total laryngeal agenesis due to congenital high airway obstruction syndrome (CHAOS).

Cooper had no airway, no larynx and therefore no voice or way to breathe outside the womb.

Laryngeal agenesis occurs when larynx development is halted during pregnancy. The reasons for this condition are unknown.

Le Bonheur Children's Fetal Center, along with Dr. Thompson and his team, put together a plan for Cooper to survive the difficult delivery. As planned, Cooper was delivered next door to Le Bonheur at Regional One Health. During delivery, Dr. Thompson performed an ex utero intrapartum treatment (EXIT) procedure, a partial caesarean section that allowed Cooper to continue to receive oxygen via his mother's placenta. While Brooke was recovering, he was transported to Le Bonheur's Neonatal Intensive Care Unit (NICU) so he could continue treatment.

Cooper stayed in Le Bonheur's NICU for 324 days and had beaten the odds for survival. Once home, he still depended on help to breathe 24 hours a day. Any health issue would threaten his life.

Two years and eight surgeries later, the Kilburn family was back at Le Bonheur. Cooper had developed well and continued to follow developmental milestones, despite never being able to make a sound. According to Dr. Thompson, "our goal was to create an anatomical airway, get him off the trach and, possibly, give him a voice."

There have been only a handful of attempts to create an anatomical airway from scratch and all have been unsuccessful.

"We planned for this surgery from day one of Cooper's life," said Thompson. "Everyone from the nurses to surgery technicians to the neonatal team rose to the challenge and worked together for this surgery to be a success."

The four-hour surgery was conducted in tandem with pediatric surgeon Ying Weatherall, MD, and Dr. Thompson. Dr. Weatherall removed two of Cooper's ribs to use to construct his new voice box.