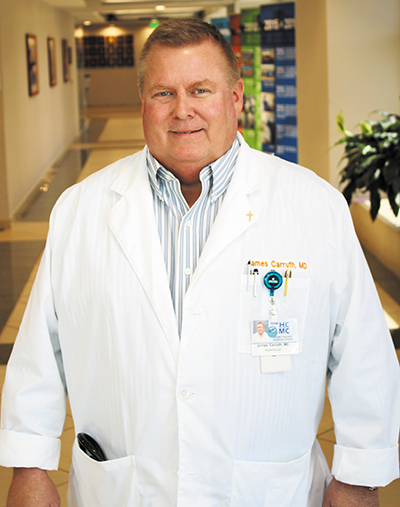 When Henry County Medical Center in Paris expanded its service line to include pulmonology and the Paris Pulmonary Clinic opened in April, longtime Jackson pulmonologist James Carruth, MD, and his Nurse Practitioner, Lachelle Moss, jumped at the opportunity to be a part of the growth. While it may be a new town, a new hospital, new staff and clinic, many of the patients are the same.

No stranger to West Tennessee, Carruth was born in Hartsville and grew up in Milan. Although he initially thought architecture would be his career because of his prowess in math, Carruth found that the field bored him. His brother, Larry Carruth, MD, was 14 years older and a physician. Being around his older brother in the hospital setting, greatly influenced Carruth's interest in medicine. He graduated in 1985 from the University of Tennessee at Martin with a Bachelor of Science degree.

When Carruth entered East Tennessee State University's Quillen College of Medicine, his thoughts were to pursue internal medicine or surgery. "I went with internal medicine with the intent of going into cardiology," he said. "However, when I got into my internal medicine training, it was apparent that cardiology was just not for me. I was more intrigued by intensive and critical care patients so pulmonology was a nice fit for that. My older brother was also a pulmonologist, so it was a specialty I had been exposed to."

He received his medical degree from East Tennessee State University and completed his post graduate work, including his internship, residency, and fellowship at the University of Arkansas. In 1995, as Carruth was completing his fellowship, he would return to West Tennessee to help provide hospital coverage for his brother's patients. In June of 1996, he joined his brother in practice full-time.

"Last April, my brother retired. We had been in practice together for nearly 24 years," said Carruth. "As my brother approached retirement, it gave me a chance to really assess things. The medical community in Jackson was changing rapidly and I had been approached by the hospital in Paris about their plans to add a pulmonologist to their staff. I had always planned to move there, this just accelerated those plans."

Henry County Medical Center had never had a pulmonologist. This meant that the program had to be built from scratch, something Carruth has played an active role in even before he joined the clinic. "From the time we started discussing the possibility of me relocating here, there was a lot to be done since most patients that needed pulmonology care had to be transferred out," he said. "Once I made the decision to come, equipment had to be ordered and the staff brought up to speed on procedures, bronchoscopy, ventilator support and non-invasive ventilation. Most everything was in place when I started in April."

The hospital is currently building a new step-down unit for its ICU. "This will further enhance the services we can provide patients," said Carruth. "We have a lot of patients on sophisticated equipment and it will be nice that they will be able to get that level of care here, especially with fall and winter seasons which bring an increase in respiratory illnesses."

One of the things Carruth enjoys most about Henry County Medical Center is the family atmosphere. "It seems as though everyone knows one another, and they are happy," he said. "We try to have that family atmosphere in my practice. My nurse practitioner is like a sister to me. Everyone in our clinic is happy and we try to impart that to our patients. It is also an important part of our philosophy to treat patients as though they were a member of our family."

While he is not surprised at how quickly the clinic and program have grown, Carruth says that he is not quite as busy as he was at his previous clinic, but that he is as busy as he wants to be. This also allows him time to interact and teach students in the Physician Assistant program through Bethel University. He currently has one student a month that he works with but hopes to eventually add precepting medical students.

"One of the best parts of being a physician to me is developing a relationship with my patients, especially since many of them are long-term patients," said Carruth. "It has been a bit humbling to see the number of patients who have chosen to continue their care with me, despite my relocating to Paris. Many of my brother's patients have also made the move with me."

Carruth is certified by the American Board of Internal Medicine and is board eligible for certification in Pulmonary Medicine. He is also a member of the American College of Chest Physicians. Carruth and his wife, Leslie, have one son, Kyle. He enjoys golf, boating, trail riding and spectator sports. He is a Tennessee Vols fan and loves to travel with his family.