Boots on the Ground in War on Cancer 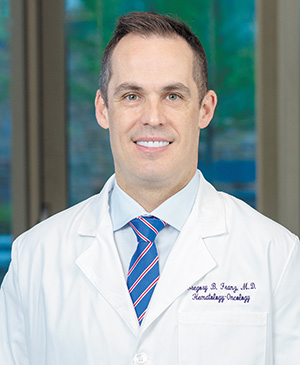 Medicine is a calling. For Gregory B. Franz, MD, that calling came out of his experience with a personal illness in college that required surgical treatment. In medical school he was drawn to oncology because he had seen his brother battle the disease. In April, the oncologist joined the staff of the Kirkland Cancer Center in Jackson and is excited to be a part of such a progressive community cancer program.

Franz grew up in the Midwest in the Dayton area of southwest Ohio. While majoring in anthropology at the University of Cincinnati, Franz became ill and required surgery, an event that changed his mind on his choice of career. "My personal experience with that illness and the associated hospitalization and treatment caused me to alter my career path to medicine because I felt it was my calling," he said. "I augmented my anthropology degree with pre-med classes because I knew there was no other option for me. Medicine was clearly what I was meant to do."

In August of 1996, Franz began his medical training at the University of Rochester School of Medicine in New York. Franz was drawn to the prestigious private school that is one of the top 30 medical programs in the country due to its smaller class size and its reputation for being a pioneer in the biopsychosocial approach model of patient care. The biopsychosocial approach was developed at Rochester decades ago by Drs. George Engel and John Romano. While traditional biomedical models of clinical medicine focus on pathophysiology and other biological approaches to disease, the biopsychosocial approach emphasizes the importance of understanding human health and illness in their fullest contexts. This approach systematically considers biological, psychological, and social factors and their complex interactions in understanding health, illness, and healthcare delivery. It also recognizes that relationships are central to providing healthcare.

"It was really blind luck that I ended up at the U of R, but I felt drawn to the program," said Franz. "The importance of learning to treat people like human beings rather than disease is something no one thinks about today because it is so integrated into medical school training, but back 40-50 years ago that was not the case. It is how I have tried to pattern my medial practice because it really centers around empathy and compassion. That there is humanism in medicine and the idea of treating every person with dignity is key. And there is proof that this works because there are plenty of studies to show it translates to better outcomes."

Franz admits he was a bit bias toward oncology as a specialty. While in medical school his 27-year-old brother was diagnosed with stage IV Non-Hodgkin lymphoma. "I liked many other specialties in medical school, but I really gravitated toward oncology and really adult cancer patients of all types, blood cancers and solid tumors. Even in my internal medicine residency at Kettering Hospital at Wright State University in Ohio, I tended to gravitate toward cancer patients," he said."

A hematology and oncology fellowship at UT Health Science Center in Memphis brought Franz to West Tennessee. The program's close affiliation with St. Jude, as well as its designation as a National Comprehensive Cancer Network (NCCN) site made it an ideal program for Franz. "The NCCN is an authority on the standard of care in the treatment of cancer patients. And the network is comprised of the top 30 cancer centers in the United States. Tennessee happens to have two, St. Jude/ UT and Vanderbilt," he said. "It was an adult only fellowship. I was trained in internal medicine so was very much into adult diseases and emotionally I don't believe I could have handled taking care of sick kids."

After his fellowship, Franz and his family headed to Southern Georgia where he completed a three-and-a-half-year post in a medically underserved area. While his time in Vidalia, Georgia confirmed to Franz that he wanted to be a community oncologist, it also showed him he wanted a bit larger town in which to raise his family. In April 2018, Franz joined the staff of the Kirkland Cancer Center.

With October being breast cancer month, Franz was eager to talk about what he considers to be the biggest news to come out in breast cancer in several years that was published in June; the Trial Assigning Individualized Options for Treatment (Rx) or TAILORx trial. "In my fellowship, breast cancer was my sub-focus and the Tailorx Trial research was going on. It was a massive study that involved thousands of breast cancer patients. The results were highly validated and greatly impact treatment decisions for many women with early-stage breast cancer," he said. "It gives us a better understanding of who will and will not benefit from chemotherapy in certain types of breast cancer. It accurately and specifically allows us to eliminate chemotherapy from patients' treatment plans who would not benefit from it, which is nice because we can now focus on more viable treatment options for these patients."

Franz feels fortunate to have the opportunity to work at a comprehensive cancer center that has highly trained nurses, social workers, therapists, nutritionists as well as multiple tumor boards and encourages close collaboration with surgeons and other specialties.

"All that really sealed the deal for me to come to Jackson," he said. "My wife, Marisa and I love the size of this town. We have lived in bigger cities but love the quality of life Jackson offers our family. There is plenty of stuff to do here and yet it is small enough to feel like home. This was the type of place we wanted to raise our two children."

The Kirkland Cancer Center is a comprehensive community center. In North America community cancer centers provide roughly 85 percent of care given to cancer patients. "Our group treats a broad array of cancers which allows us to help the greatest number of West Tennesseans as possible," said Franz. "We carry the burden. We are the boots on the ground fighting the war on cancer."