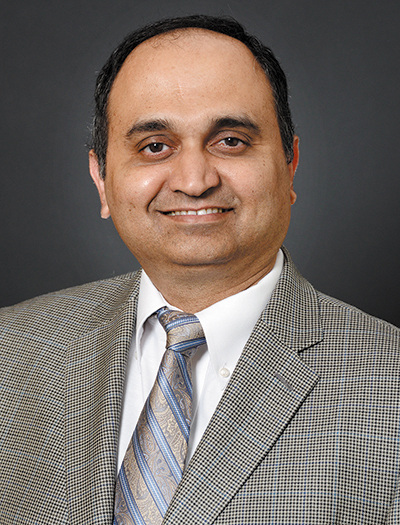 Small towns and medicine may not have been in his master plan but for West Clinic Oncologist and Hematologist Arun Rao, MD, the two have become the perfect match for him.

Growing up in Mumbai, India, Rao always felt engineering was his calling. When he took his performance exams at the end of high school, he scored high enough to interview for both medicine and engineering. As luck would have it, his medical interview was first, and he was selected to attend one of the top medical schools in Mumbai. "My parents would not let me give up my seat," said Rao. "My dad had missed an opportunity to go to medical school when he was younger and while he was a pharmaceutical representative, we had no doctors in our family at the time, so they were very happy I was going into medicine."

As he matriculated through the medical program, Rao discovered medicine to be very interesting, just not the surgical side of it. While he earned degrees in medicine and surgery at Grant Medical College in Mumbai, he took the advice of a friend, who had come to the United States, to pursue a residency in Internal Medicine at Wayne State University of Medicine in Detroit, Michigan. "I wasn't sure what aspect of medicine I wanted to do but I knew I wanted to do research," said Rao. "I met my wife during my residency in Detroit and wanted to settle in the United States."

In order to do that, Rao would have to go through a waiver process to convert his visa to one that would allow him to stay in the U.S. To be able to apply for a fellowship and get funding, he would have to either have citizenship or a visa. The conversion process involved him working as an internist in a rural area. He spent the next four years on the staff of UCI Medical Affiliates and Anderson Medical Center in Anderson, South Carolina. During his time there, he became very interested in treating cancer patients and began to look for a fellowship in oncology and hematology.

His search led him to the University of Texas Health Science Center in San Antonio which had a very strong breast cancer program. "The main attraction for me was that they offered me two years of research with one year of fellowship," said Rao. "Immunology was very interesting to me so after my first-year clinical fellowship, I pursued basic science research working with an immunologist in the lab and even had my research published. After two years doing research I joined the faculty."

While his career was budding, his family was growing. He and his wife had a daughter while in South Carolina and a son while in San Antonio. Rao also felt some pressure to give up research and move back into private practice. "I was losing touch with the clinical side of things," he said. "So, I joined the staff of Cancer Care Centers of South Texas in San Antonio."

After nine years in private practice, Rao was faced with another change. His wife, who is a neuroscientist, accepted an assistant professor position at the University of Tennessee Methodist LeBonheur in Memphis, so he began to look for a new place to practice. His search led him to the West Clinic and he knew it was the perfect match. "The clinic was expanding and held great opportunities for me," said Rao. "In 2014, the opportunity to see patients in Paris, Tennessee presented itself. Initially, I was there just a couple of days a week, but it has grown so much that I am now there three days a week and it has become my primary practice. Dr. Wang also sees patients here one day a week."

Rao says his time in Anderson, South Carolina opened his eyes to the charm of practicing in a smaller area and thinks it is why he gravitated to the opportunity to work in one again. "My residency in Detroit was totally different from what I had seen in India," he said. "Then, when I went to South Carolina, the approach to everything was different. It was a totally new culture for me, and I really enjoyed working in a rural setting. When I came to Paris, it was so similar. The people are so welcoming and appreciative of all we do. I love being able to provide oncology and hematology care to this community. We have an outstanding staff in the office. I also have the opportunity to participate on a tumor board in Memphis, so I can present complicated cases from Paris there and have a multi-disciplinary team approach to these cases."

"If my family were not in Memphis, I would be in Paris all the time," said Rao. "I love Paris, it is beautiful. The community has really embraced me, and I have to say I look forward to my time there."