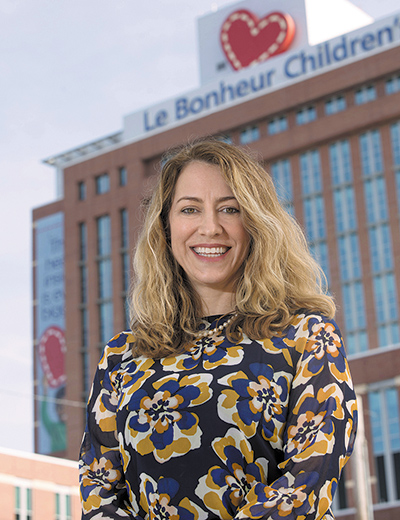 At 20, pediatric endocrinologist Kathryn Sumpter, MD, was in the middle of her junior year as a biochemistry major at Rice University in Houston, Texas. Like most Type-A personality college students, she kept her plate full and never seemed to slow down. She was studying, teaching aerobics, working out regularly and enjoying the social side of college so being a little tired and losing weight just went with the territory, or so she thought. At her mother's insistence, Sumpter had a routine check-up that ended up changing the course of her life.

"I had taken a trip with my roommates to Disney World for spring break and the whole trip they complained because I was always having to stop to go to the bathroom or get something to drink. They had even told me I was banned from drinking anything on the way home because they didn't want to have to stop all the time," said Sumpter. "My parents were living in Spring, Texas which is about an hour outside of Houston and when I got home, my mom thought I had lost too much weight even though I had not been trying. I thought being more tired and thirsty were a by-product of college life and really had just blown it off."

The diagnosis of Type 1 diabetes was a complete shock to Sumpter who had always been healthy, was active and had no family history of the disease. "I knew nothing about diabetes, much less how to adjust to living with it. I was relatively mature for 20, but I basically was diagnosed, went to an endocrinologist and in about two hours had to learn how to test my blood, count carbs and dose insulin. Then I went back to the dorm and had to go on with school and my life."

For Sumpter, it was a grieving process. "You have to give yourself time to work through it and the emotions that come with it," she said. "At first I felt like my life was over and sort of went on autopilot. I did not want others to really know or be involved. I had to immediately integrate this into my life and realize that I would be ok. Once I got further along in that process, I wanted to get involved and learn more about it as well as get to know other people with diabetes."

Ironically, Sumpter had always studied science but medicine was not something that had ever appealed to her; something she attributes in large part to never having had an impactful interaction with a physician up to that point. "After my diagnosis, I saw that my love of studying science could be intertwined with impactful personal interaction that can be so meaningful in medicine and that fit my personality," she said. "While I felt medicine was the path for me, I wanted to give myself some time after college to make sure it was what I really wanted to do and not just a knee jerk reaction to my diagnosis, so I went to work for a management consulting firm, which solidified my decision to pursue medicine."

Sumpter earned her medical degree at the University of Texas Southwestern in Dallas as well as completed her pediatric residency, a graduate certificate in clinical science and a pediatric endocrinology fellowship. She joined the Division of Pediatric Endocrinology as an Assistant Professor in 2009 and later became the Medical Director for the Children's Health Diabetes Program and Director of Clinical Research for Pediatric Endocrinology.

"I had always planned to go into endocrinology as I saw it as a way to try to make something good out of something that wasn't," said Sumpter. "I found that when I talked to other people about diabetes, it was really meaningful to me. Helping them, helped me. I thought initially I would care for adults but then once I did my pediatric rotation, I was hooked. Kids are better patients and they have tremendous advocates in their parents who help ensure they are doing what they are supposed to. I found there is more of a collaborative nature in peds and there are not a lot of egos."

Managing diabetes while in medical school and residency gave Sumpter a perspective unlike most. "I am a Type-A person who takes good care of my condition, but I would sometimes forget to do things like eat or take my insulin," she said. "It helped me realize the human side of things. I know what it is like when life gets in the way as well as the reasons why we all have to try to stay on it. I know how hard it can be to take care of a medical issue because I have one. It is my ace in the hole because I don't have to pretend that I was perfect patient. I have to do this too. I mess up sometimes and know how important it is to not make it a habit."

Being the resident expert on diabetes in the exam room, Sumpter says patients always want to know what kind of insulin pump she uses. "Mine was the first hybrid closed loop pump on the market. It has a sensor that allows it to automatically adjust the amount of insulin as needed," she said. "One thing that I realized is what works for me may not work for someone else so it is best to ask them about their life and determine which treatment will work for them."

Having lived with diabetes for 23 years, Sumpter can appreciate how far things have come and is excited for what the future holds. "From the insulin we use now to the pumps we use to administer it, we are definitely moving toward a much less challenging way to manage this disease with fewer frustrations," she said. "In terms of closed loop pumps, the one we have now is a hybrid that takes care of blood levels between meals. There is one in research that we will see on the market in a few years that will automatically give insulin for meals as well so that the person can almost forget they have diabetes. Another area of research that is really cool is smart insulin. It only works if your body needs it to work. While there are a lot of people working on this, no one has gotten it completely worked out."

In 2017, Sumpter joined the staff of Le Bonheur Children's Hospital as Clinical Director of the Diabetes Program as well as the faculty of UT Health Science Center. She also sees patients in the downtown Memphis, East Memphis and Jackson clinics. One program that Sumpter is especially proud to see kick-off is a community health initiative that focuses on diabetes control for patients between scheduled doctor visits. Community health educators will make home visits to at-risk patients in Shelby County to help with the day in and day out struggles these patients face. Initially the program will work with TennCare patients that reside in Shelby County with plans to expand it more broadly over time.