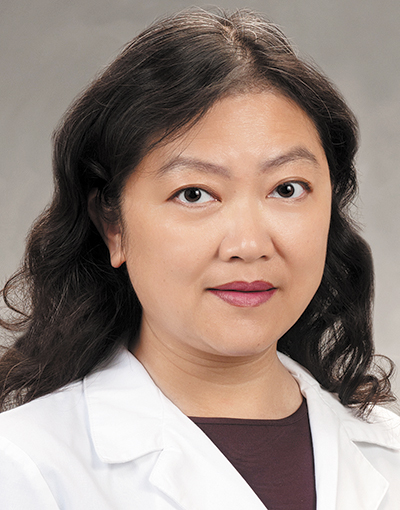 Patient First is more than just a slogan for Jackson Clinic hematologist/oncologist, Shuang Fu, MD. Putting the needs of her patients at the Kirkland Cancer Center above all else is an essential element of her medical practice.

Medicine is truly Fu's lifeblood. Her great grandfather, grandfather and mother were all doctors, and it was well understood in her family that the tradition was to continue with her. "My grandfather sent me a child-size stethoscope and blood pressure cuff when I was five," said Fu. "I knew he wanted me to be a doctor, but I think it was his way of planting the seed early."

Fu holds a medical degree, master's degree and a PhD from Beijing Medical University. During her training, she had the opportunity to participate in the first peripheral blood stem cell transplant in China at the Institute of Hematology at Beijing Medical University. When she came to the United States, she spent eight years doing medical research at Mount Sinai Hospital and Columbia University in New York. She completed a three-year fellowship in hematology and medical oncology at the Cleveland Clinic in Ohio in 2016.

Relationships have always been important to Fu, but she developed a deeper appreciation of the doctor/patient relationship during her fellowship. "At the Cleveland Clinic, the patient comes first, period," she said. "Each attending spent a lot of time with their patients, getting to know them and the stories behind them. Seeing how that level of interaction could positively impact the doctor/patient relationship left quite an impression on me."

As her fellowship was ending, Fu was considering several offers when a recruiter for the Jackson Clinic contacted her. Initially, she did not think much about it because she was in the middle of a rotation. But the recruiter was persistent, and Fu decided to take a look. "I was very impressed with the people, the Jackson Clinic and the Kirkland Cancer Center. It was a very similar setting to the Cleveland Clinic," said Fu. "I was also married with two children which were big factors in this decision. Jackson seemed to hold much of what we were looking for."

Working in a smaller cancer center, Fu sees all types of cancers but regardless of the type, her initial approach is the same. "I try to see the patient within three to five days of diagnosis and review their chart before I see them so that I know as much about them as I can, and have a treatment plan to present them," she said. "When a patient is first diagnosed, they are anxious. Having a plan of action can help alleviate some of that anxiousness as well as build up their trust in me from our initial meeting."

While many treatments can be done at the Kirkland Cancer Center, there are cases that require a higher level of care and are referred to larger medical centers such as Vanderbilt or MD Anderson. "We have a cancer conference weekly here to discuss challenging cases to make sure we are providing the best care and options," said Fu. "Often times when we do have to refer a patient for a clinical trial or care at another facility, their follow-up care can be done here."

Each October, West Tennessee Healthcare's Kirkland Cancer Center and the West Tennessee Imaging Center offer free breast cancer screenings to uninsured women ages 40 and up. For the past two years, Fu has headed this initiative. "I have been a part of this program since I came to Jackson - initially, as one of the physician volunteers who helped with the screenings," she said. "Last year, I took over as head of the program when Dr. Lewis retired, and review all patient reports from the screenings."

After three years, Fu says her initial fear of how a female Asian physician would be received in West Tennessee has passed. "I have worked hard to make sure my patients know they are my priority. As they get to know me, they see I have a good heart and am going to do the best I can to take care of them as I would a family member," she said. "Patient trust is much greater here, and there are closer relationships formed which makes my heart feel warm. I feel so much responsibility to them because they are putting their lives in my hands."

Fu's family life is one filled with music. Her husband sings in the Chinese Association choir in Memphis. Her son is a senior in high school and plays violin in Memphis orchestras and Union University. Her daughter, a seventh grader, is an accomplished pianist who also plays the flute.