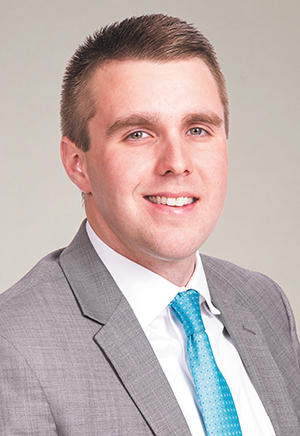 As Parker Harris enters the new year, he does so in a new role with Baptist Memorial Health Care. A role he has been preparing for since he joined the organization as an administrative fellow in 2016. As the new Chief Executive Officer of Baptist Memorial Hospital-Tipton, Harris looks forward to making a difference in rural West Tennessee.

Forging new territory is nothing new for the Jackson native. He was among the first students to attend college at the University of Memphis Lambuth Campus in Jackson. His interest in working in the healthcare sector came from his internship while working toward his undergraduate degree in accounting. As a tax accountant intern with a local accounting firm, Harris worked with medical professionals and was hooked.

Harris earned his Master of Healthcare Administration from The University of Memphis in 2016. During his master's program, he worked as a graduate assistant to Dana Dye, who serves as a vice president at Baptist and is the CEO and administrator of Baptist Memorial Hospital-Memphis. During his time as a graduate assistant, he was mentored by the system's senior administrative team.

"As a fellow, you get truly immersed in the Baptist culture as you rotate through all 22 hospitals in the system," said Harris. "You are also a part of many projects during your fellowship that further allow you to learn the intricate workings of our largest and smallest facilities, as well as reimbursement, compliance and other issues facing health care. One of my major projects involved research with MACRA (Medicare Access and CHIP Reauthorization Act) and MIPS (Merit-based Incentive Payment System) reimbursements methodologies. I also worked with the Baptist Systems Lean Management System at the facility in Jonesboro."

Once he completed his fellowship, Harris joined Baptist as the administrative director for Hospitals and Affiliate Integration. In this role, he helped lead transitional activities after Baptist and Mississippi Baptist Health Systems of Jackson, Mississippi, signed a shared mission agreement in 2017. Most recently, he helped transition the assets and operations of McKenzie Regional Hospital in McKenzie, Tennessee, to Baptist.

"This position was created when I finished my fellowship because there was a need to help integrate facilities that were brought into the Baptist system to become immersed in the culture," said Harris. "It was my role to assist in that cultural change and to really coordinate and manage any details related to the integration process. It has exposed me to so many of the issues facing rural hospitals, as well as afforded me a wealth of experience that will be invaluable to me in my role as CEO in Tipton County."

Harris saw firsthand the plight many rural communities are facing with the recent closing of the hospital in McKenzie, Tennessee. "It is a sad story since no one likes to see a hospital close," he said. "Baptist has a facility about 10 miles down the road from the one that closed so we wanted to do what we could for the community. Besides hiring more than half of the employees displaced by the closing, Baptist has worked to beef up its presence there while supporting the physicians practicing in the community. We now run the EMS services in northern Carroll County. We have a diagnostic imaging center, sleep lab and a physician referral center, and will be opening a rehab facility that will offer physical, occupational and speech therapy services."

While he may be changing hats and titles, Harris feels his roles with Baptist from his fellowship on have more than trained him to be an operational leader within the organization. "I accepted the integration role knowing it would be a stepping stone on my career path that would set me up for success to be an organizational leader," he said. "Tipton County is a good fit for me with the community knowledge I already had, and I was ready for the role."

First on Harris's list of things to do is pretty basic, just to get acquainted with the staff and the community. His experience with the facility prior to taking the CEO role, as well as a great working relationship with his predecessor, has Harris aware of areas he wants to make improvements in. "We are facing a lack of physicians in this community, a challenge many other facilities in our system face," he said. "And I want to bring some new ones to the area. It is very important to me that we meet the community healthcare needs of this county locally as much as possible. A lot of people leave the area for care due to lack of coverage, so I want to fill that gap and keep those services in this community."

Tipton County's close proximity to Memphis is a plus in Harris's eyes. "It is just on the cusp of where you can have satellite clinics, and there is plenty of opportunity to nurture relationships with Memphis physicians to come to Tipton County," he said. "It also can be a positive factor in our external recruitment efforts."

While he knows he has big shoes to fill, Harris is looking forward to building on what Sam Lynd, his predecessor at Tipton County, has already achieved there and having the opportunity to be immersed in the operational side of the healthcare system. "There are so many opportunities here to improve the operational structure and to figure out how to make smaller regional hospitals self-sustaining," he said. "I am very passionate about rural healthcare and see this as a great opportunity to roll up my sleeves and try to find a repeatable formula to operate these regional facilities that can be used in other areas."

Harris says he likes to start any project or job with the end in mind. "Long term self-sustainability is the ultimate goal," he said. "I have been immersed in the system's lean principals throughout my time with Baptist. I want to use the tools I have in my toolbox to do great things here. The foundation has been laid so now it is time to tweak some of those and see what we can do."