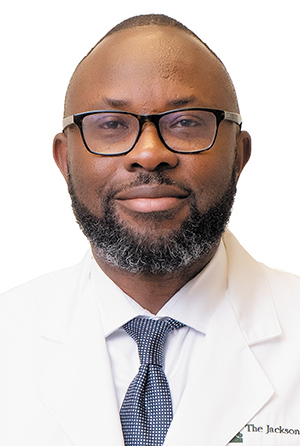 Jackson Clinic's Chima Oleru, MD, has all he wanted

Nicknames sometimes stick and sometimes they don't. For Chima Oleru, MD, the one his second-grade teacher gave him, 'Dr. Chima' seems to have stuck.

His love of the medical profession started at a very early age and became the only career he ever wanted. Today as a nephrologist with the Jackson Clinic, PA, Oleru is truly living out his childhood dream.

Hailing from a family of healthcare providers, Oleru grew up in the southeastern part of Nigeria. A great deal of his childhood was spent in the hospital where his mother worked as a registered nurse and where his interest in medicine began. "From the second grade on, I knew all I wanted to do was be a doctor," said Oleru. "And that never changed."

After graduating medical school from the University of Nigeria, Oleru came to the United States in 1997 to complete his internal medicine residency at the Health Science Center at State University of New York in Brooklyn. In his first year as an intern Oleru's first attending physician was Dr. Eli Friedman, a well-known and well-published nephrologist in the country, who left quite an impression on the intern. "He was a great teacher and really got me interested in the specialty," said Oleru. "After my residency, I stayed in New York and did a two-year nephrology fellowship at Mount Sinai Beth Israel which exposed me to a wide range of nephrological issues, including a lot of patients with HIV and even one patient from Africa with Malaria. We had patients from all walks of life. I also had some works published, including authoring a chapter in the fourth edition of the Handbook of Dialysis."

In 2005, Oleru completed his fellowship, was married and had two children under the age of two, which meant that family life was becoming a big factor in his decision in where he would practice. "My wife is also a physician so it was important to us to find a place where we could both practice as well as raise our kids. We both felt a small town would be the best fit," said Oleru. "We found the Jackson Clinic was just what we were looking for. The decision to come here was probably the second biggest decision I have ever made in my life and it has worked out so well. We have been here 14 years, which is the longest I have ever been in one place since leaving Nigeria."

Coming to West Tennessee definitely came with challenges and plenty of changes for Oleru. "There was a small bit of a communication barrier on both sides. My accent was a little hard for patients to understand at first, but I worked hard to master how to talk to patients and now it seems we all understand one another," he said. "The patient mix was also different from New York since there are more diabetes and obesity related issues in the South. Here, I tend to see more patients that have kidney issues from diabetes, disease and high blood pressure. People may think that dialysis is a large part of my practice but, on the contrary, I try to prevent them from ever getting to that point. Primary care providers are great about referring patients to us earlier so that we can help slow down the progression of the disease and stave off dialysis."

For patients in kidney failure, Oleru says they have three options: transplant, hemodialysis or peritoneal dialysis. "The best is transplant and when we have a patient with advanced kidney disease, we try to get them evaluated for a transplant before dialysis. We send most of our transplant patients to Vanderbilt or to UT-Memphis program," he said. "For hemodialysis patients, there are different ways it can be administered, either at a center or at home. The home option is one we see increasing in popularity because it can be more convenient than coming into a center and patients typically do much better on it. The home option costs about the same as the other and is covered by insurance."

Not all patients are candidates for home therapy, says Oleru, so dialysis centers will never become obsolete. "Patients have to be trained and be able to administer their therapy. There also has to be a support person in the home that can also be trained to assist the patient," he says. "We also have to look at the home environment to ensure that it is supportive of this type of therapy."

Oleru's practice is spread across West Tennessee. He sees patients in clinic in Jackson four days a week as well as runs a monthly outpatient kidney disease clinic in Selmer. For dialysis patients who are not on home therapy, Oleru sends patients to DCI centers in Paris, Lexington, Brownsville, Humboldt and Jackson as well as DaVita Centers in Jackson, Selmer and Bolivar.

While his practice here may not be as busy as when he was in a resident and fellow in New York, Oleru feels that it and his time in the hospital with his mom at an early age prepared him to not only be a doctor, but to be one in West Tennessee. "My mother would take me into the maternity section of the hospital, and I saw women giving birth at an early age. It exposed me to people who would come in sick then go home well which made it easier for me in medical school because it was something I was used to," he said. "When I came to New York, I was in the biggest public hospital. As an intern I would be on for 24-hours with no sleep and exposed to all kinds of patients. We were always busy. I think that prepared me very well for whatever came after that."