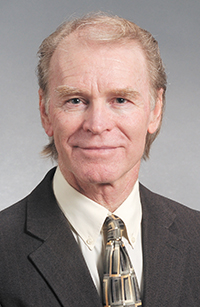 As Dave Roberts, MD, settles into his role as Chief Medical Officer Emeritus at West Tennessee Healthcare, he does so with a sense of great appreciation for the opportunities he has been given to impact not only the lives of patients but those of the many caregivers and staff members who crossed his path. One thing that is evident, in his 40 plus year career, Roberts has left an indelible impression of service, compassion and teaching with those he has worked with.

Just the mention that Roberts would be profiled in the June edition of West Tennessee Medical News elicited great enthusiasm around the C-suite at WTH. "As a person who is non-clinical, I have always loved how Dr. Roberts is able to take the most complicated clinical issue and translate it in a way that anyone can understand it. It is truly a gift because not every clinician is cognizant that not everyone speaks the medical language," said Wendie Carlson, chief human resources officer at WTH. "Dr. Roberts is a reluctant hero who is so humble. His unknown legacy is the difference he has made in so many lives because of his leadership throughout his career. His mark here at WTH is one that will not soon be forgotten because it will live on in those who have had the privilege to work with him or be treated by him."

The fact that Roberts' career has been one of education, servant leadership and putting others before self is of no surprise. The son of a minister, Roberts was born in Michigan but moved south to West Tennessee when he was 12. After graduating high school from Dyer County, Roberts started his college career at Jackson State Community College then transferred to Bethel University in McKenzie. He went to the University of Tennessee at Martin for his final year of college where he majored in secondary education with chemistry and biology as secondary majors. Prior to completing his secondary education degree, he was accepted into medical school at the University of Tennessee College of Medicine in Memphis and graduated with honors in 1976. He is board certified in both family medicine and geriatric medicine.

Roberts' residency training was through the family practice program at Jackson Madison County General Hospital, which is now the flagship of West Tennessee Healthcare. He was one of eight residents in what was the relatively new program's third class. Once his residency was completed, he joined the faculty in addition to seeing patients through the program's clinic. "The program was still so new that they were desperate for faculty," Roberts said jokingly. "I did leave for a year and a half to join a family medicine group in Gallatin but then the University called and asked me to come back and I've been here for 27 years. I joined the faculty as an associate professor in the Department of Medicine then became director for 14 years."

While on the staff of the residency program, Roberts also worked at Jackson General Hospital. In 2004, he was recruited by then CEO Jim Moss to be the vice president of medical affairs and was charged with establishing a patient safety and quality program. Chief Medical Officer was added to his title as well, something he has kept ever since.

"My role became mostly administrative at that point in my career because of the demands of the job but through my interaction with the nurses, pharmacists, medical staff, etc., I did stay close to the clinical care side," said Roberts. "I have also helped out with the hospitalist program when they were overloaded by seeing some patients during their stay. I have not done that for the last couple of years, but it was always something I greatly enjoyed."

When asked what drew him to administration, Roberts said it goes back to the days when he helped train residents. "I was the program director to more than 160 residents as well as the faculty and such that helped train them," he said. "I had an epiphany of sorts in that I started to see it as a way to reach more people in the community through those I trained. If in the course of their training I could provide a reasonable example of compassionate care for people, then hopefully that would carry over into their practices once they left training."

Roberts saw that role leveraged even further when he shifted into administration since he would now have the opportunity to be that example of compassionate care to not only physicians, but nurses and other healthcare personnel. "I have seen so much in my career, as well as in my personal life with my family, that I wanted to make a difference. It is the rationale behind some of the things that I have done," he said. "My entire career I have emphasized the safety and quality of the healthcare that patients receive. I recognize that I have been very privileged in my career and made a good living, but I have definitely tried to let other things guide me in my practice of medicine outside of financial ones."

Roberts humility is evident in not only the words of others but in his own. "I don't think that there is anything particularly special about me. I have just tried to focus on what I think are important things in life and as you get older those can change," he said. "My legacy, if there is one, is that I have tried to instill compassion and respect for other human beings as well as practicing and teaching patient-centered care."

Roberts quickly notes that healthcare does amazing things but the more invasive in nature things are, the more carefully the risk/benefit ratio for the patient has to be weighed.

"There is a difference in doing things to a patient and doing things for a patient. While technology has been a wonderful addition to the practice of medicine, we cannot take away the human part of patient care. We can never approach healthcare from a mostly technical point of view. I have tried to keep my view on what is really good for this patient. Will this technique, procedure or pill really help them in their current circumstances. And I am not saying this is unique to me, lots of physicians do this, just there is so much pressure to contain costs, length of stays and such that it can at times muddy the waters a bit."

As for the his WTH legacy, Roberts says that is rooted in his being a stickler for patient safety. His instituting a daily patient safety huddle is something he is very proud of and is pretty sure will outlive his stay at WTH. "Every day at 9am, 60 people that are directly involved in providing care to patients meet to assess what we are doing right, what we are doing wrong and how can it be fixed immediately. This has had a significant impact on our system as issues are not working their way through the system and are being addressed by those who most directly impact our patients," he said. "This program is just one indicator of how focused we are on patient safety. And so much so, it is ingrained in our culture."

People are also a huge part of Roberts' story and he is quick to mention that those relationships outshine any accolades he may have received in his career. "The role I was able to have in training physicians has meant so much, but I am also so proud of the fact that many of them chose to stay in the area to practice," he said. "The relationships I was able to establish with my patients is not only a testament to their patience but also something I cherish."

When asked what he is most proud of, Roberts says without hesitation, his marriage and his family. "I have maintained a vibrant marriage for 47 years and it is time for me to do some of the things she wants to do. She has been such a great partner and mother to our two boys and grandmother to our two grandsons," he said. "I could not be prouder of my sons and the fathers they have become. I know I had to make some sacrifices during my career, so I am looking forward to making up for some of those now."

It seems that life as CMO Emeritus may just be giving Roberts that opportunity. He recently taught his eight-year-old grandson to ride a bike, something he names as his greatest accomplishment and hopes to become just one of many major milestones.