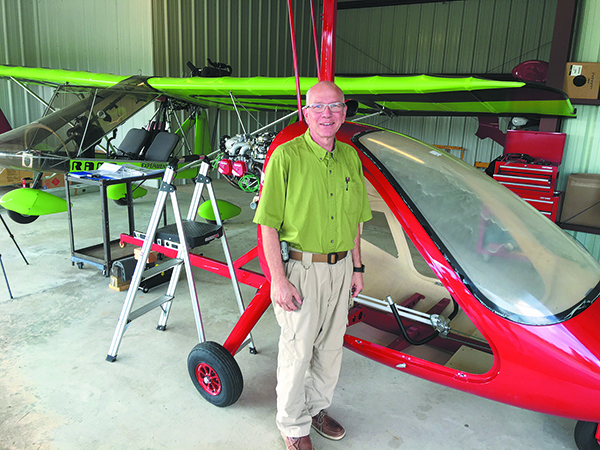 Dr. Dennis Wieck is quite the pilot, besides being licensed to fly planes, he can fly and build a gyrocopter."

Although he always said he would be a doctor, Dr. Dennis Wieck's path to medicine may seem a bit unconventional. Not many physicians can say that working to get their scuba diving instructor certificate put them on a path to medical school. Nor has having an aerospace degree, building planes or being a ham radio operator, but regardless of how he got there or what has come since, the OB/GYN at Paris Women's Center says he is right where he wants to be.

While he was born in St. Louis, Wieck spent the majority of his childhood in Nashville, moving there when he was seven. The family owned a trucking business that had routes from Chattanooga to St. Louis. Wieck's father moved his family to Nashville to run the shop for the business. In high school, Wieck was on the swim team and his love of the water led him to learn to scuba dive. In fact, if he could not go to the lake to dive, he would just use his parent's pool.

Wieck went to Middle Tennessee State University in Murfreesboro to pursue a degree in Aerospace administration and participated in the ROTC program. "While in college, we started a scuba club which led to me to becoming a certified instructor. A requirement for that was to be certified in CPR and advanced first aid. My instructor/friend who was a paramedic told me that an EMT class would satisfy that requirement which eventually led to me going to EMT school," said Wieck. "After college graduation, I went to basic training for three months then got married six weeks later. After becoming a paramedic, I worked for the ambulance service as well as the ER. I was also a scuba instructor and taught the CED classes."

It was his time in the ER that lit the fire in Wieck to attend medical school. "One of the physicians was an internist from Fort Campbell," he said. "Although I had been out of school for three years and he was the one that encouraged me to consider medical school even though I had not been a pre-med student in college. I had to take a few classes that I lacked in order to apply to medical school."

When he started medical school at the University of Tennessee Health Science Center in Memphis, Wieck thought that emergency medicine would be his choice. "I liked codes and trauma but was getting a bit burned out of the routine clinic type of issues that come into the ER. It doesn't provide you the opportunity to get to know the patient," he said. "OB turned out to be a great fit for me. The outcomes are good, it is a happy time for the patient and it still provides the adrenaline rush of the ER. You also get to develop a lasting relationship with your patients since many start out as an OB patient and then become a gynecology patient."

After completing his residency training in Wheeling, West Virginia, Wieck returned to Tennessee to start practicing in Tullahoma. After thirteen years, Wieck went out on his own, which proved to be too stressful. He moved to Dyersburg to join a hospital owned practice for four years. He relocated to Shelbyville to a facility that was owned by the same company as the hospital in Dyersburg. "Two years after I got to Shelbyville, the company built a new hospital but decided to close its OB program," said Wieck. "A friend told me that Henry County Medical Center was recruiting, and it seemed to be a good fit. After nine and a half years, I would say it is one of those things that has worked out for the better."

An aerospace degree may not be something you would think would be useful to an OB/GYN, but Wieck has found ways to put it to use over the years. "Aerospace covers anything from flying as a business pilot to running an airport," he said. "I was in the aviation maintenance unit in the Guard. In Tullahoma, I spent ten years on the airport authority, four of those as chairman, so I did use my degree for that."

A licensed pilot since the '70s, Wieck is rated to fly both airplanes and gyrocopters. He has even had some training in flying helicopters. His latest aviation passion is building a gyrocopter from a kit. According to Wikipedia, a gyrocopter or gyroplane, also known as an autogyro, is a type of rotorcraft that uses an unpowered rotor in free autorotation to develop lift. Forward thrust is provided independently, typically by an engine-driven propeller.

"I have been working on it for about a year and hope to have it ready for a test flight by the end of summer," said Wieck. "The kit, which comes from Italy, comes with an engine already built. To legally license it with the Federal Aviation Administration (FAA), I have to build 51 percent of it. I am building the controls, main rotors, landing gear, the tail and wiring the lights. The only way you can license one in the U.S. is to build it."

Wieck also has an interest in electronics. Friends got him involved with ham radio, and he became a licensed operator in the 1970s. "I build some of my equipment and it has been a great way to stay in contact with several friends as I have moved to different locations over the years," he said. "I work with the Henry County Emergency Management Agency (EMA) and am involved in Emergency Communications and Disaster preparedness for our community and West TN as well as the hospital's emergency planning committee."

Wieck and his wife, Leigh, who have been married for 40 years, have two daughters and three grandchildren. Paris, Wieck says, has been good to his family and they are very happy there, a fact that was made all the more evident after he had some health issues. "So many people we didn't even know prayed for us and that meant so much," he said. "The hospital and staff are exceptional here and I feel so fortunate to be a part of such a wonderful community."