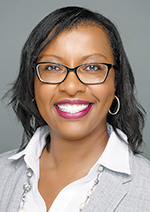 BlueCross BlueShield of Tennessee has named Dalya Qualls as director of corporate communications.

Qualls will serve as a spokesperson for the company and direct a team responsible the company's internal and external communication strategies.

Prior to joining BlueCross, Qualls served as communications manager with HCA Healthcare, where she directed the company's media strategy and oversaw the team that developed content for digital platforms. Previously, Qualls served as deputy communications director for the Tennessee Department of Safety and Homeland Security, where she held primary spokesperson duties and handled media strategy for related agencies.