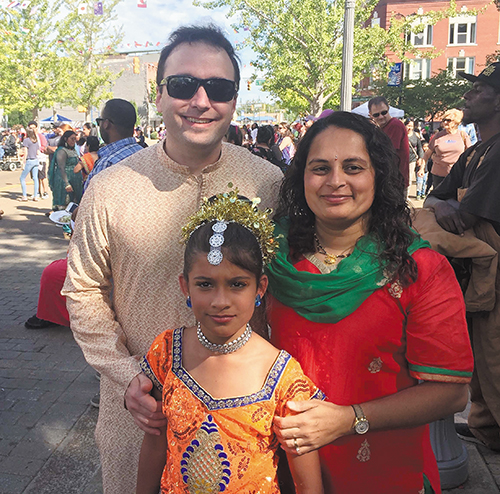 Dr. Ami Naik and her husband enjoy watching their daughter perform traditional Indian dance at such events as the International Festival in downtown Jackson.

Jackson Clinic gastroenterologist is first physician in her family

While her birth certificate may say she's from India, Ami Naik, MD's roots are firmly planted in West Tennessee. Being the first physician in her family was not only her dream, but also that of her parents who brought her to the U.S. at an early age. Today the gastroenterologist at the Jackson Clinic, PA, is living out that dream.

Naik was born in India but did not stay long. At the age of one and a half, her uncle sponsored her family in a move to the United States. Naik's family moved frequently with her father's job as a mechanical engineer before settling in Paris, Tennessee in 1989 where she went to E.W. Grove Middle School and Henry County High School. To feed her passion for medicine, Naik volunteered at Henry County Medical Center throughout high school.

"There were no doctors in my family and it was something my parents had hoped I would become, especially when we came to America," said Naik. "I had always had an interest in science and biology and I could not think of anything else I would want to do other than become a doctor."

After earning her degree in biology with a minor in chemistry at the University of Tennessee at Martin, Naik headed to Memphis to attend medical school at the UT-Health Sciences Center. While she knew she wanted to go into a subspecialty of internal medicine, it took rotating through all the subspecialties before she chose gastroenterology. She knew that more women were needed in the field. She also liked that it was clinically stimulating as well as procedurally oriented. She completed her internal medicine residency at St. Louis University then returned to Memphis and UTHSC to complete her three-year fellowship in gastroenterology.

When choosing where to practice after her fellowship, family factored heavily in her decision. "I met my husband in college and we went to medical school together. He did his neurology residency at Washington University and worked in Memphis while I finished up my fellowship in 2008," said Naik. "We also had an eight-month-old daughter, so we wanted to be near family. Fortunately, we were both recruited by practices in Jackson. We thought it a good fit for us and a nice size town to raise our family in. He took a job with West Tennessee Neurosciences and I joined Medical Specialty. In January 2012, I joined the Jackson Clinic, PA."

After nearly ten years in practice, Naik says there have been some big changes in the specialty. "The scopes we use have become more flexible and provide higher definition images that allow us to detect things such as polyps and esophageal inflammation as well as if they are pre-cancerous issues in the colon and GI tract. Capsule endoscopy technology lets us see the small intestine and find sources of bleeding or abnormalities that we may not have been able to detect prior to this development."

In October, Naik began using radio frequency ablation (RFA) for patients with acid reflux that develop Barrett's esophagus. This occurs when the cells of the esophagus begin to transform due to chronic exposure to acid. "Early detection and treatment of Barrett's esophagus is essential, since it has the potential to halt progression to esophageal cancer," said Naik. "Once I was trained on the equipment I started doing procedures which can help remove Barrett's tissue and reduce the risk of cancer in these patients."

Helping patients, regardless of their issues, is what Naik finds to be the most rewarding part of gastroenterology. To that end, she has developed some videos that have been featured on the Jackson Clinic's Facebook page to encourage patients to be screened for colon cancer, as well as educate them on what to expect from a colonoscopy. "Colon cancer is the third leading cause of cancer in men and women in the United States and is one that is very preventable by screening and early detection," she said. "These videos address the importance of getting screened and what to expect from the preparation and screening process."

Balancing a two-physician household with a child has been made a bit easier for Naik due to her job and the support of family and friends. "The clinic allowed me to have a job that was strictly outpatient and did not require me to take call which was nice since my husband does take call," she said. "Our families being close by has also been a huge help, along with our nanny who has been with us for nearly ten years. She makes sure my very busy ten-year-old daughter makes it to all her many activities which include ballet, theater, voice lessons, horseback riding and Indian dance."